Visit to Nazi death camp in Italy, in Trieste 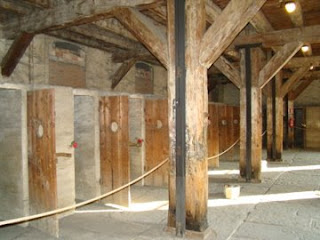 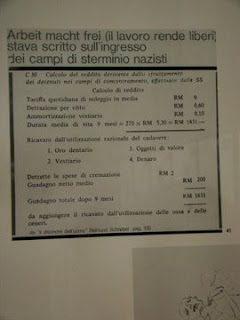 On the left: 17 prison cells for detainees. On the right: a German document showing calculation of Revenues and Expenses of a prisoner (Photos by John Friedlan)


The Italian city of Trieste is known for its important coffee importing port, its Austrian style palaces and piazzas, and the beautiful Adriatic Sea beaches. It is also known in Italian history as the site of the only Second World War Nazi extermination camp in that country, where an estimated 20, 000 people passed through, and 5,000 people were murdered, including Italian Jews.

I had planned to take the family to see the camp, called the Risiera di San Saba, because I had heard about it from an American Jewish journalist friend Ruth Ellen Gruber who lives in Italy. Today, is it a national monument set up by the Italian government in 1965.
Here’s how we prepared for the trip: the Friday before, we spent Shabbat in Venice. We toured the synagogues, ate Kosher food at the local bakery, attended Friday night services at the Sephardic synagogue, and later, ate dinner along the canal together with some new friends from Australia, including a Rabbi and his wife, and sang with the Chabadniks who put on the spread.

On the Monday, we visited Trieste, just an hour’s drive away.

In all my years of learning about the Holocaust, I had visited Auschwitz, Treblinka, Majdanek and Dachau, and I have seen plenty of documentaries, and I even worked as a video assistant on the Stephen Spielberg Shoah Foundation interviews in Toronto in the late 1990s. But the Risiera di San Saba was the most shocking place connected with the Holocaust that I have ever seen. Perhaps it was because of how my children reacted to it. But mainly, it was because of one haunting document. But first, some background.

The Risiera was actually built in 1898 as a rice-husking factory (riso means rice in Italian) and it’s located just east of the city centre, across the street from the soccer stadium. It began its life as a temporary prison camp for Italian captured soldiers in September 1943, called Stalag 339. But one month after it opened, in October 1943, it was converted to a combination transit camp, prison camp and death camp.

The Nazis picked highly experienced officers to run the place, including soldiers who had previously cut their teeth working in camps with Himmler to murder 2 million Jews in Poland. One man was especially well known for using large trucks to poison Jews.

You enter the Risiera from the street through a long stark cement tunnel. On the left is the main office (visits are free). Next door down is the “death cell”, which according to the brochure, was where prisoners who were going to be executed within a few hours were held, and also bodies to be cremated were stored there.

The next stop takes you out into the courtyard of the factory where you see on your left, a large three storey building. It housed dressmaking and shoemaking shops where prisoners worked for the SS, and also the quarters for the soldiers. These floors are not open to the public today. The main floor, however, has 17 tiny prison cells, with wooden doors, and two bunks each. According to the tour book, the Nazis forced up to 6 prisoners to be held in each one. The prisoners included Italian anti-Fascist partisans, political prisoners, and Jews who were set to be executed.
A survivor of these cells was interviewed for a film that is shown later in the Risiera’s museum theatre. He was Italian. He recalls being locked in the cell for 5 months, with no daylight, no change of clothes, and having so many lice he felt as though he was wearing a coat.

Two of the cells were used for prisoners who were being tortured for information. The museum guide details how the torture was carried out. It was usually at night, to hide the crimes from the surrounding neighbourhood buildings. Loud music was played to drown out the screams, and dogs were made to bark in order to cover up the cries.

Witnesses recount how the guards did the executions: some victims were placed in special vehicles that had gas exhausts connected to the inside, others were hit with a club at the base of their skulls, and there were also shootings.

Today, relatives and other organizations have placed flowers and memorial candles at each cell door and in the room.

Leaving the cell room, you walk back into the courtyard into the next building, this one four storeys high. It was where Jews, and other prisoners were kept until they were deported to Germany. Trieste during the Second World War has 5,000 Jewish residents. About 700 were rounded up and died either at San Saba or deported to other death camps. Only 8 returned after the war.

Outside, back in the courtyard, if you face west, you see a metal floor, and the markings on the complex’s outer back wall that are shaped like a small building. This is where the underground crematorium was located. The architects who designed the museum in the late 60s recreated the shape of the building’s floor only, using metal plates, to trace the outline, as well as the line where the smokestack shadow would have been. The rest of the courtyard is now an open-air non-denominational place for prayer, except for the metal plaques showing where the crematorium was.

Originally, there was no crematorium at the Risiera, but in March 1944, the Germans had one ordered from a local supplier in Italy (under false pretenses, according to later testimony from the builder) and had it installed. It operated for a year until April 29, 1945, when the Germans dynamited it to hide evidence before fleeing the Yugoslav troops who were the first to enter the site. The explosion damaged half the Risiera complex, but human ashes and bones were found and so was the infamous “club” used to kill prisoners.

Moving to the west, past memorial plaques placed by relatives and Jewish and other Italian official organizations, you enter the Risiera’s historic archive collection and museum. It has about 50 panels under glass, with photos of wartime news items, letters from prisoners, identity cards, and the usual examples of uniforms and even ashes of Jews murdered in Auschwitz. Most is in Italian, Slovenian, and English so it was easy to understand and learn about the importance the Nazis gave to the Trieste area as a strategic place between Europe and the Balkans.

But one panel was so chilling, so perverse, so mind boggling, that even today, it is hard to comprehend.
My husband is an accountant and professor of accounting. So on this trip to Italy, we had earlier made a “pilgrimage” to see the hometown of Luca Pacioli, who is considered the founder of modern accounting. We saw Pacioli’s marble life sized statue, his street, and the palazzo where he lived.
Here in the Risiera di San Saba, we encountered another kind of accounting: a document in German showed the expenses and revenue entries of a German official calculating how much money (in Reich marks) it cost the regime to house a prisoner in a concentration camp for nine months, including cost for the uniform, food etc. A lower entry showed it cost the camp 2 Reich marks for the gas to kill the prisoner. And underneath, it showed the calculation of revenues from the victim’s gold teeth, personal property etc.

My children joined us after words in the small theatre to watch the half hour documentary about the Risiera. It showed the survivors, the guards, the officers, and old wartime footage. Both kids were very quiet absorbing their first experience up close and personal with the Holocaust (aside from meeting survivors in Toronto including their long standing babysitter).
On the walk back to the car, my youngest said to me “Mummy, if I was alive then, I would try to kill Hitler.” They were full of questions such as why none of the Allies tried to bomb the tracks to the death camps, or why none of the Trieste citizens tried to help. We did explain how some of the Catholics in Italy did hide Jews and Italian partisans, but it was a bitter lesson for them in long ago racism and hatred.
By the way, the Nazis who ran this camp were eventually caught, tried, and punished by the Allied War Crimes courts. Most were sentenced to death. The senior commander committed suicide before his trial.