Imagine - The new exhibit by Yoko Ono in Montreal 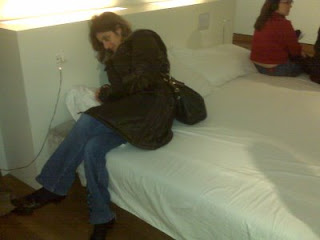 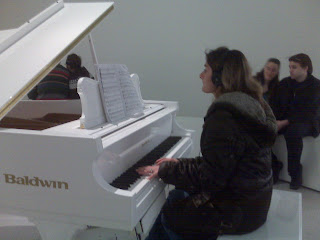 (Photos by Brenda Bessner. 1) Ellin listening to the interviews through a speaker on the famous Bed  2.) Ellin playing "Imagine" at the exhibit)
I used to hate Yoko Ono.
When I was growing up, we blamed her for breaking up the Beatles, and for being too out there, too weird, too avant garde.
Now I know she and John Lennon were just ahead of their time. By about 40 years.
I've just seen the exhibit in Montreal commemorating the 40th anniversary of the famous "Bed In" for peace put on by John Lennon and Yoko Ono in Montreal's Queen Elizabeth Hotel.
That's when they held court in a hotel bed for a week, inviting journalists, artists, religious leaders and other musicians to create music and share their vision of peace.
Now, after seeing exhibit, and marveling at who went to see it --- the young children with their parents, the older couples, the three generations,  the all kinds of colours and races of people who attended the free exhibit ---- I think people are now finally ready to listen to what John and Yoko were saying all those years ago.
You walk in to the exhibit at the Montreal Museum of Fine Arts and you hear John and Yoko calling to each other. It is a bit weird, and I thought "Oh no. Here's more of that weird Yoko stuff which I used to hate when I was growing up." Performance art. Public participation art.
So I took a pass on hammering a nail into that white canvas. And I didn't climb the ladder to see the art that was on the ceiling (you get a different perspective on the art from up high). And seeing them naked posing for photos back when they were just newlyweds, seemed more of the same provocative art they always did, which to me, used to feel phony.
But when you move through to the next room, and see the BED, and they let you actually lie on it, I was able to stay there for a long time, quietly, tossing off my shoes, and I watched at length,  some of their famous bed-interviews with journalists, actors, spiritual leaders and other intelligentsia of the day.
That's when I started to feet the bed-in maybe wasn't just another one of their self-promoting publicity stunts. They were just being like today's modern day stars, who throw their massive influence behind charities and causes they feel must be promoted.  Think of Brad Pitt (Make It Right foundation to rebuild New Orleans) or Bono, or Bob Geldof who put together Live Aid for Africa.
The world of the 60's and early 70's just wasn't interested in what John and Yoko were trying to do, which is promote the end of the Vietnam war, promote tolerance, promote respect, and promote freedom.
In the next room, exhibit goers can see the actual hand written lyrics to "Happy Christmas (The War is Over)" and see Lennon's hand drawn sketches, his anti-war videos, and documents showing his struggles with U.S. and Toronto immigration authorities who basically thought he was a terrorist. You can see John and Yoko declaring their Nutopia republic, a land with no passports, no borders, no flag.
The next room lets you sit down at a white piano and play Imagine (it has hard chords!). I watched a white mustache-sporting father try to teach his biracial daughter how to play the left hand chords while he played the right hand melody. The father was wiping away his tears when they were done.
Next room is where Yoko Ono has created new art pieces just for this show. One is a tree of wishes, where people can write a wish on a tag, then tie it to the tree. The trees were crammed with these beige tags fluttering as museum goers passed by. I wrote "Peace is Good" which is what my husband and I used to say to each other when we first met, after some tumultuous previous adventures we both had.
The next room had maps plastered all over the walls, and stamps attached to them with strings. You can stamp "Imagine Peace" anywhere you wish. It made me so happy to see the darkest areas with the most stamps were the Middle East.
I stamped there, too, and I stamped my own hand, to try to take a little of Yoko Ono and John Lennon's message out with me, to make it last. And to comfort me.
I've needed comfort. In recent weeks and months, it's been hard to cope with the barrage of constant violence in the world, the terrorism in Mumbai, the fighting in Gaza, the suicide bombers in Afghanistan and Iraq and Pakistan, the growing anti-Israel and anti-Jewish sentiment in Toronto, and the unbearable unending injustice in Darfur, to name a few.  The message of "Imagine"  takes on so much more relevance and power.
Take your kids and your parents to see it. Take your grandparents. You'll all end up leaving the exhibit humming "All we are saying, is give peace a chance".