Teaching Interviewing: My students teach me. 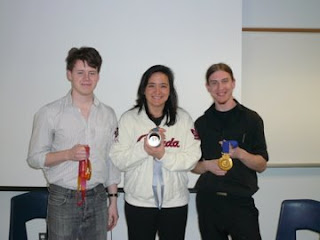 I teach an Advanced Interviewing course at Centennial College school of Journalism every winter -- 15 weeks of teaching students that interviewing is an art.

And every year, during the first hour of class, I thank the students for the privilege of being their teacher for this course.

Teaching it helps ME be a better journalist; going over with THEM the techniques and tricks and skills and thought which is needed to conduct a satisfying and successful interview always helps ME do a better job in my own interviews.

This month, I've had to interview some prominent Canadians, for my husband's new accounting textbook.

Today was the Auditor General of Canada Sheila Fraser. Last week was Ian Clarke, Vice President of Maple Leafs Sports and Entertainment. Next week it will be Mark Powell of Boston Pizza.

All have been interviewed a million times before.

So I've been even more diligent then usual preparing for these interviews because, as I tell my students, good sit down interviews of prominent guests need to be handled more carefully then an everyday scrum with the Mayor does.

The interviewer needs to find something to break the ice, to connect with the guest, to keep them engaged, and to try to get at "feeling level" responses (not the "If this is about my new movie, Press 1" kind of answer which movie stars have to give on press interview junkets).

So I practiced what I preached: I spent hours researching the guests. I read everything I could get my hands on, online - going back 10 years. I watched interviews they'd done on Strombo, or with trade magazines, and professional magazines. I even stalked their family members on Facebook, without making contact, of course. And on Twitter. Then I thought up questions which I hoped would be different then the usual ones they've answered a million times already. Or expand on an issue they'd talked about before.

And then I did the next steps -- steps my students have been learning to do: I wore a suit, I showed up super early at the locations. I checked my video camera and microphone and tape recorder to make sure they all worked, I scoped out the rooms where the interviews were to be conducted, and made friends with the receptionists.

While there, although I already had prepared a couple of icebreakers, I observed my surroundings to see if there were any cool things in their buildings which I could refer to as ice breakers or during the interview itself.

With Ian Clarke, of Maple Leafs Sports and Entertainment, since he and I are about the same age, and we both are ex Montrealers who both have 2 boys who both play hockey, and since he went to university where my cousin was a professor, I thought that might be good to establish rapport.

I had also prepared a second ice breaker: about his kids. I told him that my father is a lawyer, but when we were growing up, he wasn't the coolest show-and-tell parent to bring to school -- being a lawyer wasn't nearly as cool as the father who owned the clothing factory with the most popular fashions at the time like Debbie Wexelman's father, who gave her all the latest sweaters and shirts from Razzle Dazzle and Jump for Charlie. So I asked him whether his kids thought their father's job was the best show-and-tell father at school, i.e. having access to the players on the Leafs, the Raptors, the Marlies, and free tickets to all the rock concerts at the ACC they could ever want.

Our chat went on for about 30 minutes. We talked about who the coolest person he'd met in his career was (Bobby Orr), how he'd like to meet President Barack Obama, how the only performer he went backstage to meet was Tina Turner, how going to build homes in New Orleans after the Hurricane was "life changing". And about leadership.

I tried to make it a conversation. It was intense. I gave him my best "George Strombo" intense eye contact and listening. When it was over, I felt privileged to have met him. Maybe I rambled too much.

With the Auditor General, it wasn't as easy to figure out how to break the ice. Although she's been interviewed a million times, there isn't much about her personal interests, or her non-work hobbies or interests, on line.

I canvassed my students this week to ask for their suggestions. One said I should play word games. Another said to bring a jar of jellybeans and ask her to audit how many are in the jar. I thought that was brilliant, but my husband kyboshed it as undignified.

So then I remembered my research and it came to me. Give her something she doesn't know. Kind of like a gift. I thought I could try the icebreaker by telling her about the Twitter messages I've seen about her, and give her the printed copy of it, which says she looks like she never has any fun. And also the website called Love.Com that has a fan page about her. And then ask her if she'd ever seen the You Tube cartoons by Nelvana (the folks who brought us Franklin the Turtle) about Harold Rosenbaum, Accountant Extraordinaire who fights crime with his audit bag and calculator.

So I did all this. I also admitted up front that, despite my 28 years in the business, I wasn't sure what would work with her to break the ice, and could she help me?

And it seemed to have worked. She was very gracious, and we then proceeded to talk for half an hour about her work, my kids, her kids, our travels, and her plans, as well as weaving questions in there about the job, how she got mono and strep throat at 17 and how that led her to become an accountant, and her feelings about being the "Mick Jagger" of the accounting profession, as one newspaper called her. We discussed bodyguards, favourite TV shows, divorce, and women's issues. It felt like a conversation. I hope it did for her too. I only looked at my questions twice, at the end of the interview, to make sure I'd covered everything I needed.

And I admit that once during the interview, while she was talking, I was thinking about the next question. And I blanked out. I couldn't remember what I wanted to ask her. Yikes! But then I started listening to her even more closely, and it came to me just in the nick of time, and I mirrored back to her some of her answer, and moved to what she could remember about her first audit job as an intern fresh out of accounting school.

At the end of the interview, my students helped me in yet another way. Yesterday they were watching the cool video of that British woman who sang Les Miserables on Britain's Got Talent and surprised Simon Cowell because she was so plain with a unibrow, but a voice to make goosebumps on anyone who listens to her. And so I watched it in class with them. And today, when we were discussing new technology, I asked her if she had seen this video. She hadn't. So later today, when I got home, I sent her a thank you note by email, with the link to watch that video of Susan Boyle.

So, once again, I thank my students for always teaching me more then I teach them.