Roller coasters and the power of the Internet 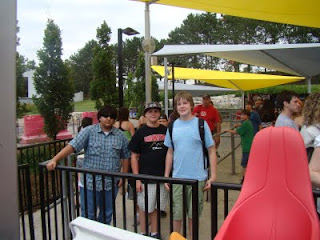 This past week, I've been working on a short documentary for CBC Radio on folks who love roller coasters. From left to right: Chris Uzun, Tim Hill and Greg Hill about to ride Behemoth. July 17, 2009.
(Full disclosure here: I am a 'fraidy cat and only went on Dragon Fire once this summer at Canada's Wonderland to prove to my kids that I was not a 'wuss' -- never again! My neck hurt for two days after the ride.)
And thanks to the World Wide Web, I was able to find some amazing sources for my story about folks who love roller coasters.
Starting from a tip from my son who's friend heard online about some guy who'd been riding Behemoth for 11 hours so far at Canada's Wonderland in Vaughan, Ontario, I decided to Google to see if I could find this person.
I eventually landed on a site called CWMania, and so I did surf a little through the postings, until I found what I was looking for.
I joined the site, identified myself as a reporter, and asked the webmaster to help me track down folks who ride Behemoth a lot.
Behemoth, for those of you who don't know, is the fastest, tallest rollercoaster at Wonderland, and the fastest in Canada, since opening in 2008.
I also emailed the person I thought was my 11 hour guy.
I used my gmail account, and waited to see what would happen.
A day later, I got back emails from both the webmaster and the person I was looking for!
Both agreed to help me.
I also got emails from a half dozen other riders, with some useful anecdotes for the story.
As for my 11 hour rider, and his brother, who also rides, before interviewing thim in person, I did make sure they were who they said they were, first, by checking not only their Facebook accounts but their Twitter accounts, and that of their relatives. I did the same for an 18 year old rider who is doing the same thing.
Then I set up the interview and a date and time and place to meet the teens near Wonderland. I also followed it up with a telephone call before the actual interview meeting, to confirm it in person over the telephone.
The other amazing thing about the Internet, and crowdsourcing, was the help which I received from some other members of this CWMania website.
One email sent me some links to scholarly journal articles about roller coaster riders, and psychologists, the information from which I wound up using to find an interview with a Dr. Michael Otto, from Boston University, who is an expert in coasters and phobias.
I emailed him, and also telephoned his office in Boston, and left messages on a Sunday, and on the Monday, when I called his office and spoke to his publicist in person, she told me she had already passed on my request for an interview, and he did call me back! Bingo.
Also, his colleague, another psychologist from Harvard, Dr. Brian Newmark, also called me back, after I'd sent him a note via his wife's Facebook account, and had left a message on their home answering machine, after having looked up the telephone number on the white pages online.
I also am thankful for the Internet and CWMania's website, as it put me in touch with a terrific expert on coaster enthusiasts from Mississauga, Paul Schroeder, who I researched by first reading his blog, and Myspace account, then asked him to meet me for an interview. We did speak on the phone first, and then met at the CBC for an interview.
He's also sent me links to other coaster stories which I am grateful for.
So the moral of the story for journalism students is: act on tips from sources and people around you, and use the Internet to do your initial research for the journalism, but make sure you use old fashioned journalistic techniques: always check who you are interviewing, research using the Internet if you can, and then do follow up research (telephone due diligence) before meeting anyone for an interview. And ladies, do the interviews in a public place.
The Internet is also amazing to help you make your stories better and more thorough: as I learned with this rollercoaster story, your sources know more than you about their field of expertise, and can point you in directions that you would never have thought of on your own.
My piece on rollercoaster enthusiasts is supposed to air on the CBC's World at Six on Aug 3. I wrote a full online print story on the phenomenon, to accompany the radio piece, for CBC.ca.
Here are both stories.
http://www.cbc.ca/canada/story/2009/07/31/f-rollercoaster-behemoth.html
By the way, one of my rollercoaster interviewees gave me the surprise of the summer:
in emailing back and forth, to try to establish his credentials and whether he'd be a good interview, I asked him what he did for a living. He emailed back that he had a paper route.
I asked him how old he was.
He wrote back that he was 12.
I was stunned!
Then, I immediately worried that his parents might be upset about a reporter chatting with a 12 year old online.
So I asked him to ask his parents if it was okay for him to be chatting with me.
He suggested to have me send him some kind of waiver form that they could sign.
I don't actually have such a thing but I did eventually speak on the phone with his mother, and she felt relieved about this.
Maybe they Googled me and learned that I was who I said I was.
Again, the power of the Internet.
Here is some raw video I took showing the Behemoth station where riders enter and exit.