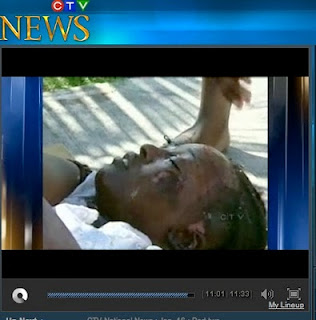 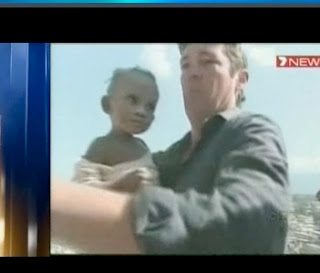 
Take a look at these two screen captures of recent scenes from Haiti. An Australian Television reporter is handed a baby who'd been pulled out from the rubble alive, after four days. He's her first aid provider.
The other photo shows a young teenaged girl being given the last rites, and was administered with cameras rolling.
These two scenes from recent tv coverage of Haiti relief efforts highlight the ethical issues which media organizations surely must be facing as they try to capture the horror and devastation of the recent earthquake in Haiti. What are news agencies telling their staff who arrive in Haiti: are they telling reporters to help to rescue people, or telling them to remain objective bystanders? Should they help pull people out and distribute water and food, or should they just cover the story?
And why are there so many reporters and news organizations crawling over Port Au Prince anyway, using up electricity and resources? Does CNN need all those people there, and their producers and crews? Why did they not form a pool, and send a lot fewer reporters and crews to the scene? It seems strange and somehow callous that the masses of reporters are able to move around, eat and drink, and use cellphones and electricity, when 3 million people there, can not.
*****
And how much personal space are the refugees and displaced Haitians being given by media organaizations -- are the reporters and camera crews even asking permission to film such intimate human moments as the last breaths of a dying girl?
And with people in shock, traumatized and barely able to eat or sleep, are the victims of the earthquake fully able to understand what camera crews and reporters are filming? Or do they not care, or are they not even realizing they are being filmed?
And how do media agencies decide to show someone being filmed close up, at the moment they are dying? Why not shoot the scene using a wide shot, and let the viewer see it, from a respectful distance. We get it. I feel that anything else is a personal invasion of privacy for that woman and her family. I hope permission was asked before the shooting was done.
***
It is such a tragic story that I imagine many journalists now in Haiti must feel they need to try to help, while at the same time sending stories back to their newsrooms.
But is there a corporate policy against becoming part of the story? A reporter last night on CTV News went to a neighbourhood near Port Au Prince to try to find a Canadian who's family had not heard from her. The report which Tom Clark filed was great, and luckily, they did find the Canadian woman alive. Will CTV airlift her out on the journalists' planes back to Canada? It
would be interesting to find out.
Perhaps it's too soon to discuss this whole ethical issue about reporting on Haiti. And perhaps I would be doing the same thing if I was on the scene -- trying to get the best sound, the best story, the most vivid images. But seeing scenes like this next one made me shake my head: a woman reporter, I think from Brazil, stuck her microphone nearly into the airholes of the collapsed buildings while rescuers were still trying to dig out a baby who'd been trapped for days. It made me wonder why the reporter wasn't also helping to dig? Why not show this rescue job using a wide shot, rather then have the reporter crawling over the broken concrete blocks, right in the shot, poking her mic near the airhole, while the trained rescuer listens for noises to signal the baby was still alive? What if that reporter could have helped, but didn't and then the baby died?
I don't know the answers to this one. I do know what I've seen and done in my war reporting career. I covered civil wars in Liberia, Sierra Leone, and Mozambique. I travelled into war zones and refugee camps on UN flights. I interviewed traumatized survivors of torture, machete attacks, rape, amputations and hunger, and thanks to our fixers, and the World Food Program (WFP) and the UN, I was able to see distribution of relief supplies, and health clinics set up in the field by Medecins San Frontieres. As the journalist, what I saw moved me, and shocked me, but I didn't try to roll bandages or feed a malnourished child myself. I did record the sounds and the sights as best I could for CBC's the World at Six radio program. And I carefully prepared stories using the best sounds and interviews that I could to tell the listeners what I'd seen and what was going on.
***
Then there is, how much to show and how much not to show. I imagine there was a lot of discussion Saturday night in the photo editor's office at the Toronto Star over the photo which the paper ran on Sunday's front page of the print edition. The Toronto Star accompanied an account of some vigilante justice, the burning and torturing of a suspected looter, with a graphic photo of the victim's body with his attackers still poised to strike him. It was an incredible photo, and reminded me of the one Paul Watson took of the U.S. soldier in Somalia being dragged through the streets after 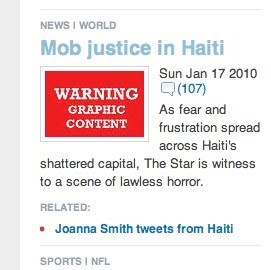 Black Hawk Down. Brutal. That photo won him the Pulitzer Prize. So why did the Star publish the graphic photo in its print edition, but not online, and indeed put a warning up, that would show the photo ONLY if the reader clicked through? Was it so graphic that online viewers would be upset, but the readers who get the hard copy edition wouldn't? I don't understand why the difference.
Here is the original picture.