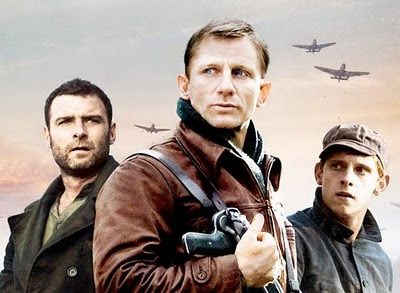 Liev Schrieber, Daniel Craig star in Defiance.
A year ago, James Bond star Daniel Craig and X men star Liev Schreiber brought to the silver screen the true story of the Holocaust partisan Bielski brothers, who saved 1,200 Jews from the Nazis by creating a Jewish settlement in the forests of Belarus. The movie is called "Defiance" -it portrays Tuvia and Zus Bielski's story.
I wrote about seeing the film, and how it reminded me of two dear friends now living in Toronto who also survived the Holocaust by living in a cave in the forests near Harkov, Ukraine for two years. 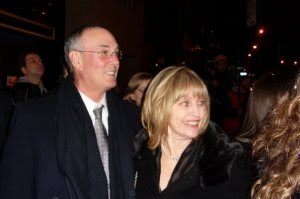 Jay Bielski and wife at premiere of
"Defiance" in 2009 (courtesy The Jewish Star)
This week, a year later, I received a comment on my blog from none other then the son of Zus Bielski, a Dr. Jay (Jakow) Bielski, who is a psychologist now living and working in New York. I nearly fell off my chair when the post arrived!
I have to admit that although I was shocked at first, it was tremendously flattering that my insignificant personal musings would interest anyone, not to mention the offspring of one of the most courageous characters to survive the Nazi Final Solution.
Then my journalistic instincts kicked in, and I thought 'Well, perhaps it's a hoax?" So I researched Dr. Bielski, and it turns out he is who he says he is. A prolific blogger, public speaker, and curator of the memory of his famous father and uncle. He also has very strong views about the Middle East and how to solve the Israel-Palestinian issue, and how to respond to terror.
In my research, I also discovered that the blog post he sent to me about my story, was not unique -- he has sent similar versions of it, with one or two additions, to other websites and blogs.
I grew up after the War with Zus and Tuvia; I'm Zus and Sonia's son. I am named after my father’s brother and my mother’s brother, both Yaakovs, who were murdered by the Nazis, I am Yaakov; how fitting. Defiance captures the impulsivity of Zus and the wisdom of Tuvia. None of the Bielskis were petty criminals prior to the War that was made up in the movie as an explanation why they had, and still propagate via their children and grandchildren, aggressive skills. The reality was that they lived in a small village and had a mill which converted wheat and other products into cooking fares (breads). Growing up they had to defend themselves and their business from the locals. They were always a family team, 9 brothers and 2 sisters, and also had many non Jewish friends who helped them during the Holocaust. They developed a reputation before the War that "you shouldn't mess with the Bielskis because you are sure to lose" a quote by Aron Bell Bielski. As the environment grew more hostile against Jews and the Bielskis in particular, the ante was raised and so was their response to it, ruthlessness and compassion. The Defiance movie did not show Bielskis' enemies’ heads being axed (Jerusalem in the Woods, The History Channel 11/06). The Bielskis gave the death penalty to captured Nazis by grenades as each Nazi watched his fellows get blown up knowing that he will be next. "It was very smelly" said Shula Rubin in The Bielski Partisans a documentary by Kumar 1996. Many unmentionable acts were done without remorse by the Bielski Otriad (excluding the massacre fallacy of Naliboki, which falsely accuses the Bielski of killing civilians unnecessarily). Remember what would you do if they killed your mother and father, your brothers, your wife and daughter? Zus never considered his revenge disproportionate nor did he consider Israel's responses to the killing of Israelis ever disproportionate. He told me many times, THEY, will only understand the stick. The THEY change over time in the Jewish experience, was our response to Egyptian slavery disproportionate, after all many died of the plagues and sea? I think that whether by choice or coincidence Mr. Zwick prioritized Tuvia as the Moses figure and Zus as David, of Goliath fame. This inadvertently (?)points to disproportionate responses are necessary to maintain Jewish life. Between me and you if the Bielskis’ Defiance movie has any positive influence on Israeli gov’t a more assertive and permanent solution would already be in place both politically and militarily. Defiance was not intended to directly comment on Israeli policies it intended to show that all Jews are capable and obligated to live and be defiant to anyone who threatens our existence, anytime, anywhere. ‘I am Bielski’
So I Facebooked him, to make sure he was for real. I asked him how my blog came to his attention.
Today, he responded that he has a Google Alert for anything that mentions "Defiance Bielski".
I trust he wouldn't object to me sharing his message with you:

"Dear Ms. Bessner, your blog came to my attention because I have a google alert on Defiance Bielski. When I read about Lidiia and Ilya I felt compelled to respond to such an amazing and uplifting description of their lives. Because of my background I need to tell people about the Bielski Brothers and what they were able to do despite the overwhelming oppression and murderous intentions of the Nazis of their time and the would be oppressors of our time. It is not impossible to win, what the Bielskis have done was deemed impossible but as we now see there are many thousands of people here because they said 'nothing is impossible'."