God, Guns and Oil - and Sarah Palin: journalism in Alaksa 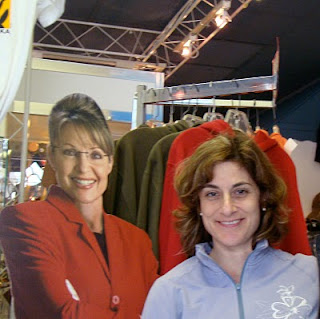 I was on the Park Connection bus last month traveling between Denali National Park and Anchorage, Alaska when we passed through Wasilla. 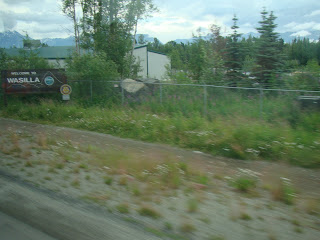 Yes, that Wasilla.
The home town of former Republican vice presidential candidate Sarah Palin, the former Alaska governor, who's also a former mayor, and now a much sought after speaker.
And yes, some gift shops in this state do sell t-shirts with the slogan "I can see Russia from my window".
For the record: you can't. Not from Wasilla, anyway.
What I did see were newspapers from north to south, Fairbanks to Juneau, where Palin's name, or her husband Todd's name, or Bristol Palin's name, are usually in the top stories. The Alaska Daily News website has a section called Palin Headlines, with a box of news about Palin. Today they discussed her comments about US President Obama not having "cojones" when he appeared recently on "The View".

There's an election underway in the U.S. now for Senate seats, and although Palin herself isn't running, just having her husband sit in the audience at candidate Joe Miller's campaign event, was enough to merit above the fold coverage, and, according to the Anchorage Daily News, an endorsement. 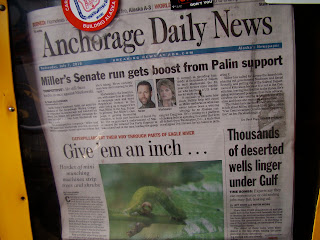 Many people may ridicule Sarah Palin, and comedians may joke about her lack of foreign policy experience, or her unorthodox way with words, or her non-traditional family despite her espoused family values. But here in Alaska, Palin is bigger news then the Pope.

In the Fairbanks Daily News-Miner, a story about a biography of Palin being written specially for children, was published just under the photo of rapper Jay-Z's concert in Ireland. The book, by Christian publishing house Zondervan, will tell tweens about Palin and her Christian values. According to the newspaper story, it won't mention anything about unwed daughter Bristol's baby, born when the girl was just 18.

We didn't stop at the Palin compound in Wasilla, as it would have meant an unscheduled detour for the rest of the passengers, but I understand better now why she is in favour of hunting. The only place in Alaska where I noticed obvious suppport for the right to bear arms, was in Wasilla. See the store in the photo, and photo I snapped of the window sticker on a car stopped next to us at the traffic light. 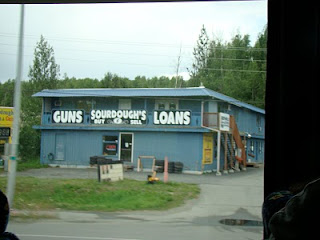 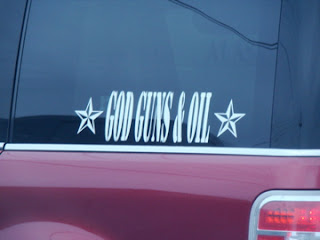 Supporting hunting isn't an opinion I would normally share. But carrying a gun? Maybe. After two weeks of hiking and camping in Alaska, and seeing moose and grizzlies and caribou, I might have been happier if our guide had had a weapon with him, rather then just two cans of bear guard. 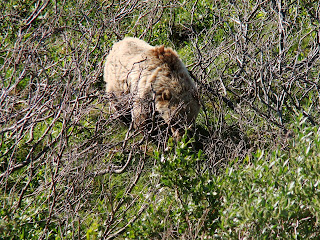 This young grizzly bear was just outside my bus in Denali National Park. Shoot him? For sport? No. But to protect yourself? It's done here. And reported about in the news. They also quote the experts who often say never to shoot a charging grizzly, since it will hurt the bear, and probably make them madder. Bear attacks are big news here, too. A police officer recently used a taser on one in Anchorage and is in hot water for doing so.

The local TV News station KTUU covers bear attacks and reports stories about education and hiking safety, while Anchorage Daily News's ADN.com has a section for people to submit information about bear sightings on their main webpage. 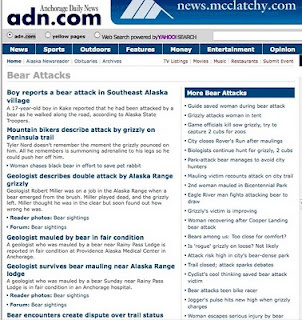 It's not just bears who make big news here: salmon do, too, and so does the majestic scenery, 100,000 glaciers, mountains, moose, caribou, waterfalls, and bald eagles soaring overhead. All that beauty and natural resources is amazing, and whether it makes people here believe in God more then elsewhere, or not, it does make the environment a big news story in Alaska. After all, I think it's hard not to be awestruck with the spectacle of Mt. McKinley, the highest peak in North America, at 20,000 ft. plus. Especially seeing it on a clear day, like I did. 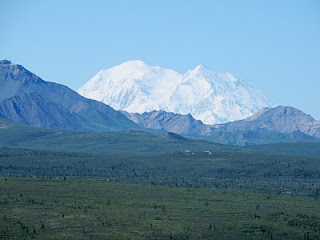 Alaskan news organizations spend a lot of time covering the environment and how development could impact it. Be it a new Pebble Mine proposal for Bristol Bay, or global warming being blamed for slow salmon runs, the papers cover stories pitting the "Drill, Baby, Drill" camp against the environmentalists and native Alaskan first nations bands. As well, local papers in Alaska have any news about the British Petroleum oil disaster in the Gulf of Mexico, on their front pages. After all, the Exxon Valdez oil tanker disaster here in 1989 is still very much in readers' minds.

And while papers across the country have news stories about crime and law and order, I saw something in a paper in Alaska that I haven't seen elsewhere: where the Toronto Star or National Post might cover one big crime or manhunt or arrest, in Fairbanks, Alaska, they report the entire contents of the local police blotter each and every day. In the Public Safety Report, they even put the result of the breathalyzer test right in the newspaper, before the suspect has gone to trial. With names and everything! In Canada, my students at Centennial College Journalism school are not permitted to write stories that would place them in contempt of court like that, at least according to Canadian law. The paper does have this disclaimer before the feature:
Individuals named as arrested and/or charged with crimes in this report are presumed innocent until proved guilty in a court of law.

Here's a sample from the Fairbanks Daily News-Miner:

• Reign Sherrell Bennett, 20, of North Pole, was charged with driving under the influence after being stopped for speeding Wednesday on Buzby Road. A chemical test found Bennett’s breath-alcohol content to be 0.149, more than the legal limit of 0.08.

• Timothy Keonikeltner, 24, was charged with driving under the influence after Alaska State Troopers pulled him over for speeding near 351 Mile the Richardson Highway. A chemical test found his breath-alcohol content to be 0.127.

• Corey Spears, 36, was charged with driving under the influence after troopers stopped him for weaving on the Mitchell Expressway near University Avenue. A chemical test found his breath-alcohol content to be 0.128.
Read more: Fairbanks Daily News-Miner - Looking Back in Fairbanks — July 17
-----

One final note: I teach my students about the Mack Truck Moment in journalism. That's what happens in an interview when the guest mumbles something unexpected like "I did murder her" and the interviewer ignores the comment and proceeds to the next prepared question which is something like "How about those Blue Jays?". In other words, when someone drives a Mack Truck through your yard, you'd better stop what you are doing and pay attention to it. So when the Public Safety report had the following entry, what question should a good reporter have asked the police department, but didn't? !!!!


Stephen Ronald Englishoe, 61, of Chalkyitsik, was charged with first-degree failure to register as a sex offender, a felony, after Fairbanks International Airport police treated him Wednesday after he fell out of an aircraft that was about to disembark. Englishoe has been out of compliance with the state’s registry since December 2008, according to charging documents.
Read more: Fairbanks Daily News-Miner - Public Safety Report — July 10