A leak of sulphuric acid into the air over Scarborough, Ontario today happened just as I was about to teach a journalism class at the University of Toronto Scarborough/Centennial College joint program. It was supposed to be about feature writing.


But that plan went out the window, after one of the students rushed over with her red laptop to tell me that a local Toronto TV station was reporting a chemical leak, which was just blocks from our campus at Morningside Avenue and the 401. 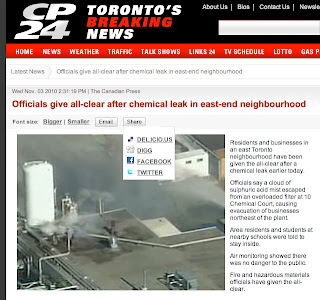 We didn't know at the time if our campus would have to be evacuated, but it became clear that this was a real bit of breaking news, so I decided to throw out my lesson plan, and improvise: I turned the classroom into a multiplatform newsroom, and those 18 students were soon frantically scurrying around covering as many aspects as we could think of to this  developing story.


Three were tasked to be the main writers for the online story, which was regularly updated and published on a blog. 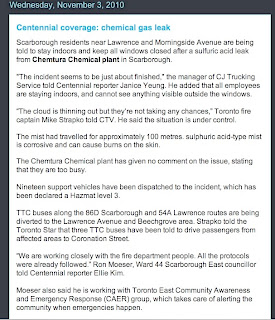 The trio used Google docs to simultaneously collect information coming from other students in the class, write the copy and edit it online together, before publishing it. 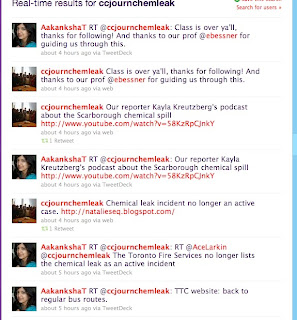 Two other students created a Twitter feed called ccjournchemleak. They updated the feed  as it was being researched and confirmed by the other students.


One student was sent to find a picture on the Internet we could use. Another created a Google map by going to My Maps and watching the online tutorial and following the instructions.


Still another monitored the Toronto Fire Services website "active incidents" area for updates as to how many vehicles responded, the kinds of trucks and pumpers and ladder trucks.


Over at the back of the class, we had one student monitor all the other media outlets including Twitter to make sure we had the latest info. And to try to find other sources or eye witnesses.


Two students who had arrived late because they'd been stuck in traffic at the very scene of the chemical spill, wrote eye witness accounts of what they'd seen, and one created a podcast which was then posted on YouTube and linked to the blog.

We had reporters calling the local city councillor for the ward to get a quote, and one contacted businesses nearby to find out how they were reacting or evacuating staff. A call to the Rouge Valley Hospital turned out to be the first anyone there had heard of the incident.
A reporter called media relations of the Toronto Police although I told her not to expect a call back since they usually call the "big guys" first.
A student did get a quote from Toronto EMS media relations checking for any injuries. Attempts were made to get information from the Workers Compensation board. They did find out how often employees are injured or miss work because of explosions in Canada. And they dug up why the sulphuric acid is dangerous to humans.


Some checked the TTC for service interruptions and rerouting, others checked with TDSB about what the public schools were doing.


They checked GO and Via Rail since the site is beside a rail line. They compiled lists of important institutions nearby.


They found financial background on the chemical company, revealing a previous chemical leak earlier this year in Elmira, Ontario. They learned of financial restructuring efforts under Chapter 11 in the US, and the fact the company made a chemical that gives the flavour to buttered popcorn.
One student actually did reach a spokesman for the company, and managed to get a useable comment for the website.


They used the newsroom telephones, their own cellphones, their online researching skills, and their interviewing skills. And in 90 minutes, they provided followers and readers (we did have some, okay maybe 10, including the CBC's Steven d'Sousa who called in with some info) with comprehensive coverage of the chemical spill.


I didn't send a reporter to the scene because the senior level journalism students next door  who work for the program's TorontoObserver.ca had sent two reporters already for their website, and I didn't want to step on any toes. Otherwise we would have had fresh video, as well. See the Observer coverage here:


The level of adrenaline pumping through that classroom was palpable. They were tireless. They kept turning up new stuff that broadened the story as the minutes went by.


None have had any training in any of this. They have been in journalism school now for only nine weeks.


So there were some CP Stylebook errors and some words that should have been capitalized (or not).


But I was impressed with their eagerness to tackle a real breaking story, the way real newsrooms do it, like at the Toronto Star or the Sun.


I myself learned to do a lot of these social media skills and digital journalism skills in May 2010, after attending a workshop run by Robb Montgomery of Visual Editors, where we actually did a simulated breaking news coverage of man-eating sea monsters being spotted in Toronto Harbour.  It was great training for today's real thing.


Now that I've had time to think about it, we could have done even more reporting and online storytelling by making graphics, and wordles and putting together a slideshow using Vuvox.
Oh well, next time.


I'm posting some of the comments that the students sent to me, when they were done, so you can see their thoughts on the experience.

First of all, today was one of the most exciting classes, if not the most. Having a team of people all working on different aspects of the same story was exhilarating. I enjoyed being able to use my experience in social media to create the Twitter feed (@ccjounchemleak) and combining everyone's information into one story. I saw the problems of using Twitter (not enough characters) and the advantages (speed, immediacy etc.) You were right in saying today was right up my alley. I love moving around from station to station seeing what everyone has found out and relaying that info around the room. It may not have been a huge story now that it is over with no injuries, yet it was a great learning experience.


In order to find pictures, we used Google Maps, and linked
both a street view and satellite view for our portion of the coverage. To do
this, we saved a map on my Gmail account, which we learned to
do in a 3 minute tutorial video.
I think the experience was very exciting, spontaneous and
active.  It was very fun to be apart of all the activity.  I

personally learned something new from the task I was given, a skill I
can now use for the future.
It was really fun and I was high on adrenaline. So much fun! We should totally do it again....
The timeliness of our report and the use of social media made the experience super exciting. The rush to publish a post and update it was a glimpse of what it's like to be in a newsroom when a story breaks. The team work was amazing.
------


Comments from the Dean of the School of Communications, Media and Design, Nate Horowitz:

Excellent coverage!
Thanks.
Nate
----
Comments from the web editor of the Town Crier online, Philip Alves, who also runs the Toronto Observer's web edition
and teaches multiplatform journalism at Centennial
Holy smokes! Great stuff.
Kudos to you and the students!
Cheers,
Phil