Interview awards …
It was an elegant affair at the East York campus Thursday at the Not Ready for Prime Time Interviewing awards, hosted by Lindy Oughtred. From the formal printed invitations (who really needs a Royal Wedding invite after this?) to the baked goods supplied by folks including Janet Piercey, awards were handed out for everything from best costume to best interviewer. Congratulations to the students who won the real awards, and the joke ones, too. Check out the photos by Octavian Lacatusu here:
At the UTSC campus Wednesday, Ellin Bessner’s Advanced interviewing awards for Joint Journalism students, saw 6 prizes handed out for everything from best dressed to most likely to succeed Oprah Winfrey. 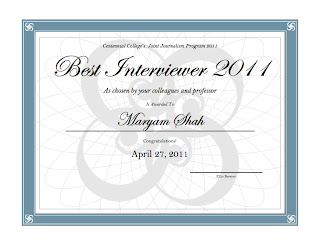 Thursday night, the CCC campus served up the best of the best awards to students who achieved high marks in their programs, as well as the newly-established Entrepreneur Awards, to students who showed creativity and leadership for themselves and their community. Pictures here on Flickr.
First Semester Journalism…
Our deepest condolences to the family of the late taxidermist Cliff McCutcheon, who stuffed a blue whale for the Canadian National Exhibition, who’s obituary the first year journalism students had to submit to Ted Barris for their final writing assignment.
Observer…
Congratulations to the @TorontoObserver crew and the East York Observer print edition, for rating a mention in the Toronto Star this week. The Observer reported that the Don Valley West NDP candidate has been missing in action and didn’t attend all candidates’ sessions, and won’t talk to the press. Story originated by Kristen Annabile and Matilda Miranda and picked up by @tomwalkom, Thomas Walkom, national affairs columnist. Read his story here. 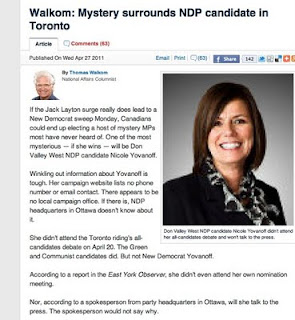 Stay tuned to TorontoObserver.ca and to Observer Radio News on May 2, when journalism students will fan out across the GTA and East York ridings to cover the Federal election.

Luckily Jack Layton’s riding and campaign headquarters is in the riding where our program's community newspaper the Toronto Observer is located, so we shall be right in the most newsworthy area Monday night!
UTSC BYE BYE Morningside Observer: 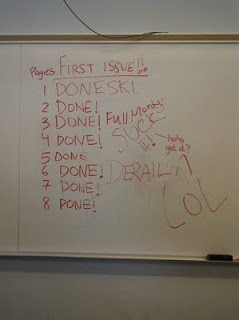 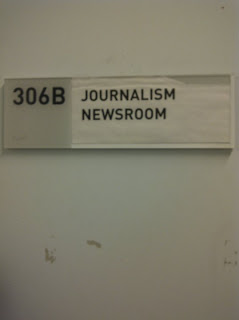 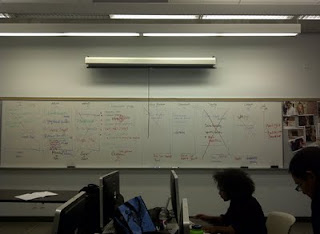 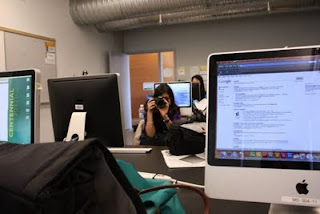 (photos courtesy of Aakanksha Tangri)
After 5 years, it’s a bittersweet bye bye this week to the Morningside campus newsroom, and classroom 304 and 306b for the UTSC/Centennial joint journalism program. After a half dozen years of offering classes to the students at 755 Morningside, the eastern campus next to UTSC will no longer house the joint program with the East Toronto Observer serving Malvern, West Hill and Scarborough. Starting this fall, all classes will be held at the soon-to-be-renovated (beginning in June) East York journalism campus at Mortimer and Carlaw (Pape subway!)
Say what you will about the smallish cupboard sized/Observer newsroom 306b --- (Maximum capacity 15 people) --  it sure has provided excellent training for 5+ years of journalism students. Sure it was cramped, but what great memories! Where there were more students then computers, where the ESL and GENEd students routinely came in, looking desperately for staplers, or for someone from IT to help them fix their printers, or folks hoping to complete their fall registration timetables! “No, this isn’t the English department.” “No you can’t use this lab, it’s for journalism students only.” The Scarborough campus lab has produced countless editions of the newspaper, great TV and audio stories, eye-catching layouts, award winning Beat magazines, and has seen more Facebook visits then anyone could count.  Not to mention the annual Wall of your Observer Staff photos with crayon mustaches!
Speaking of UTSC journalism grads, congratulations to Megan Harris (Centennial Journalism 2010) who will be interning this summer writing stories and content for real estate writer and advisor (the Globe and Mail) John Warrilow, entrepreneur and consultant.
http://www.theglobeandmail.com/report-on-business/your-business/exit/john-warrillow/
PHOTO CALL please!!!  Anyone with memories of Morningside campus Journalism is invited to send in a Tweet or an email and we’ll collect them and publish them, and any photos which you wish to send in, would also be appreciated. You can tweet to @centennialjourn  or email to :
journalism@centennialcollege.ca
or to
ebessner@centennialcollege.ca