Last week, I posted a story about how Centennial's journalism program helps our students get jobs. Thanks for the good feedback on the blog post. Since we launched our Twitter account  @centennialjourn  and we are putting graduate success stories on our College webpages (see Ryan Sang's testimonial here) http://www.centennialcollege.ca/thecentre/journalismft, we've been hearing from many of you, staff and students and grads.


I've decided to try to put together a regular newsletter about the events going on around campus, as well as news from grads/alum and profs. So here is Edition 2.


This week, it's all about awards! We have the CLIX photo gala, the Dean's Award winners announced, and grad Murtz Jaffer flying  high in L.A. with all the reality tv stars! 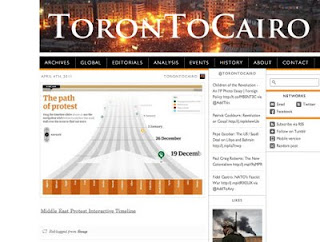 Awards season:
The Dean’s Award for highest GPA last year at the East York journalism programs:  in the three year Category: Meegan Scanlon, now completing her internship at Explore magazine in Toronto,  and Jaclyn Desforges, for the Fast Track program, who is completing her internship at homemakers.com,  and preparing for her upcoming September wedding. Congratulations.
•                Meegan Scanlon has also won the new Dean’s Innovation and Entrepreneurship Award, for the East York campus, which is for the student who is an independent thinker, takes the initiative in identifying and creating an opportunity, accepts the associated risks, and establishes value for themselves and others.  Meegan was one of the founders of Centennial’s Internet Radio station, had her own radio show on outdoor activities, and co edited Freshly Pressed, the magazine for first semester student stories, and planned a wedding all at the same time.
The awards presentations will be made April 28 at a ceremony on campus.
*Shannon Keller has won the award for Fast Track program this year, for being the driving force behind www.torontocairo.ca, a website created during the Tahrir Square in Cairo protests to link young people in Toronto and Egypt through social media.
Here’s what professor Jeffrey Dvorkin, a former NPR Ombudsman and managing editor of CBC Radio News, who now teaches multiplatform journalism at Centennial College, had to say about this endeavour.
“We created a site www.torontocairo.ca which linked up young people
in both cities to comment on the rapidly changing events in Egypt. We
created a Twitter feed and a Facebook page to track how people were responding to
events. We contacted students at the American University in Cairo and they
contributed to the discussion.”
You can listen to Shannon Keller’s interview here about TorontoCairo on this podcast by Observer Radio News which aired on the Friday when Hosni Mubarak stepped down. Hosts: Scott Reid, Connie Jean Kennedy, Nicolas Pescod, Nicole Pulsinelli and Alissa Randall.
http://www.box.net/shared/3gacvzxet6
It’s also awards night for the CLIX photography contest for 2011, open to digital imaging photojournalism students in Jim Babbage and Joseph Marranca’s courses at EY and the UTSC students at Morningside campus.
The gala is April 13  with the show from 6:30 to 8 pm in the Corridor Gallery on the second floor of the CCC campus. Refreshments will be served. Congratulations to Alex Ward, Farhanna Uddin, Ocatavian Lacatusu for the winning photos.
You can read Jim Babbage’s story about it here:
http://jimbabbage.ca/blog/?p=202
Grads update: Where are they now?
Shawn Starr
: Three year grad (2010) now working at the Town Crier in Toronto.
Like some of the other students in the article, I was also hired at the end of my internship. At the end of May, I will have been with the Town Crier newspapers and magazines for a year as both a reporter and copy editor. While I cover virtually every topic, I've mostly been focusing on crime, politics and features. Some of my personal favourites include: 1. A North York woman whose basement has flooded 18 times in eight years, but has received no compensation from the city, 2. The bizarre murder-for-hire plot and subsequent torching of Harold the Jewellery Buyer, 3. The ongoing saga of politics in the Beach.
I'm glad to see so many people doing well post-graduation, and I've even heard Centennial journalism being talked about in the newsroom as a place that's becoming known for putting out great talent. It's very encouraging to see, considering how often we hear that the industry is shrinking.
Simone Castello, fast Track (2009) Graduate now web editor working at jobpostings magazine.

I graduated from the fast-track journalism program at Centennial college in 2009. Since then, I've had the chance to work as a writer in print and online at different magazines, including some overseas. Right now, I work at jobpostings magazine as their web editor, and I can credit the instructors and courses I took at Centennial College for preparing me to take on this role. I will always have fond memories of my time at the Centre for Creative Communications, and am proud to say I'm a graduate from Centennial College's fast-track journalism program.
And if you get the chance, please let the students know about us. We're a valuable resource for students looking for work after grad.
You can find us on
Facebook: http://www.facebook.com/jobpostingsca
Twitter: @jobpostingsca
Online: http://www.jobpostings.ca

Graduate Murtz Jaffer, (Fast Track 2003) who is a celebrity reporter,  hosted  his own Gemini Award winning TV show called Reality Obsessed on TV Tropolis, and founded the website InsidePulse .com, which reports on popular culture, and has a staff of 200 writers.
Murtz was in L.A. this week to receive the 'Special Achievement In Reality Reporting Award' at the Reality Rocks convention in Los Angeles. http://tvguide.ca/tvnews/articles/110317_murtz_jaffer_award_dw.htm
First year student Leslie Eamons' story has been published by Centennial College’s website about her father also being a Centennial grad, in automotive. The story came out of a J0-102 Intro to News Reporting class audio podcast project that was picked up by the college. Read her story here. http://www.centennialcollege.ca/news/grenada
Yamri Taddese of the UTSC joint journalism program reads the news for an Ethiopian language TV show on Rogers TV
http://www.rogerstv.com/page.aspx?lid=12&rid=17&sid=4033
UTSC (2010) student Emily Hunter has released a new book on the new breed of young people who are fighting to save the environment around the world, as she does, herself. You can read about the book here.
http://www.NextEcoWarriors.com/ 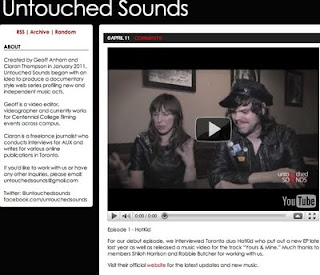 Three year grad (2010) Ciaran Thompson and CCSAI multi media whiz Geoff Anhorn have started a new web series documenting new artists/bands.   It's called Untouched Sounds and we've posted the first episode on our website.   http://untouchedsounds.tumblr.com/
Ciaran asks people to “do us a favour and search Untouched Sounds on Facebook and 'like us' or 'become our friend' or whatever it is. (No, I still haven't joined Facebook. Surprise surprise)   You can also follow us on Twitter: @untouchedsounds   Thanks very much!   Ciaran