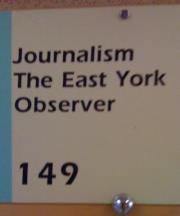 Back to school
Monday is the first day back to work for many Centennial Journalism faculty members, although Malcolm Kelly and the sports journalism students have been hard at work all summer. It’s exciting to see the renovations to the Toronto Observer newsroom take shape. Here are the latest photos of the newsroom under construction (from Friday Aug. 19) taken by Ted Fairhurst. 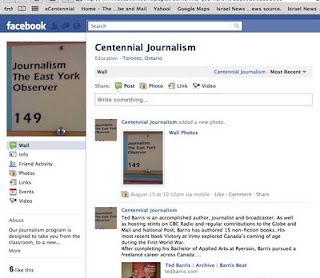 The program now has its own official Facebook page for announcements, news, photos and events.  Thanks to Steve Cogan and family for setting it up. Check it out! Like us!
Observer Radio News

Centennial Journalism webmaster and multiplatform instructor Phil Alves has posted dozens and dozens of Observer Radio News voicers from this past semester to the college student portfolio portal Centennial onDemand. Have a listen! If they are yours, don't forget to save the links and post them to your own personal portfolio.
http://centennialondemand.com/channel/media/audio/observer-radio-news/
Where are our grads:

Murray Crawford is out in Lloydminster, Alberta at the Meridian Booster, a Sunmedia paper. He was just promoted to senior reporter.


Jane Wang completed the Joint Program in Journalism in December 2007. She then attended law school. Jane wrote her bar exams in the spring of 2011. She is now articling with the Toronto law firm, Torkin Manes LLP.
Lindsay Bodnaruk was in the 2006/07 college cohort. She did her internship at Entertainment Tonight Canada. Lindsay is now an office manager with Buck Productions, a global leader in commercial, film, and television production.
Eleni Kanavas, (UTSC Spring 2008) is a Communications Officer at Sunnybrook Research Institute (www.sunnybrook.ca/research). She took the position in August 2010 after beginning her career as a Media and Communications Assistant in the University of Toronto (Scarborough) communications and public affairs office.  Eleni’s stories appear in Sunnybrook Research Institute’s magazine, Inventing the Future of Health Care.
Cassie (Jeysman) Prosper is a public relations consultant with Hill and Knowlton. She specializes in the Technology Communications Practice and her clients include Motorola and Hewlett-Packard. She was nominated for a CPRS (Canadian Public Relations Society) award in the category of Young PR Professional of the Year. After graduating from the Joint Journalism Program in August 2007, Cassie enrolled in the post-graduate Public Relations Certificate Program at Humber College. She finished that program with honours in October 2008.
Katrina Rozal graduated with her degree and diploma in the spring of 2010. She is now the archivist for Sun News Network. It’s her first full-time job and it grew directly out of her internship as a chase producer for Canoe Live, the current affairs program when the station was formerly Sun TV. Katrina was a recipient of the Dean’s Award.  The award recognizes students who earn the highest GPA score from the college semesters of the Joint Program.
Geoff Micks has a new ebook available on Kindle.
http://www.amazon.com/Inca-ebook/dp/B005FQSPBU/ref=sr_1_1?ie=UTF8&qid=1312673751&sr=8-1 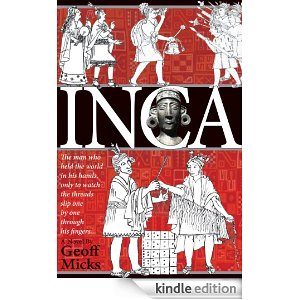 INCA:
Fans of historical fiction can look forward to an epic family saga covering more than seventy years to include almost everything we know happened between the zenith and nadir of Inca power. More than two-thirds of the characters are based on real people, and every corner of the empire is visited over the course of the narrator’s life: The plot has court intrigue, forbidden loves, triumphs, tragedies, rivalries, heroes, monsters, coups, civil wars, prophecies, plagues, treasures, sex and violence –all before the conquistadors arrive to change everything forevermore.
Jamie Ngo –Graduated from the UTSC/Centennial joint program in 2007, and is now Assistant manager, Communications at Scotiabank. Before that she worked for the bank in the president’s office, after reporting for the Toronto Sun and Omni Television.
Send us your news! We want to hear from you.