When I see the images of looters robbing that injured young Malaysian student and taking stuff from his backpack, instead of helping him,  I can’t help thinking about our own vastly difference experience as a victim of crime in London during our trip there just a few weeks ago.
On June 23, after seeing “Billy Elliot” in the afternoon, my family and I went to the new M&M’s candy store in Leicester Square.
http://worldchocolateguide.com/shop/mms-world/london/
We bought some chocolate-covered nuts, took photos with the giant M&M’s solider, and then headed over to walk along Piccadilly to see the famous Fortnum & Mason food emporium. 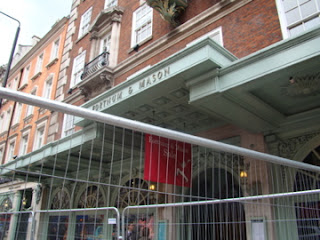 Sometime later at dinner on the South Bank, when the bill came, my husband couldn't find his wallet.
I was sure I had seen him put it in his outside coat pocket earlier in the day, but it was gone now.
I started to panic because the wallet contained all his credit cards, and his driver's license, plus his ID cards, and health card. So I would have had to drive "on the wrong side of the road". And getting new credit cards while on vacation would be a big headache.
After a worried night and calls to our credit card companies’ emergency numbers back home in Toronto, we went back to the M&M’s store as soon as it opened the next morning to see if we'd left the wallet there.
Their efficient security manager, a South African man in a dark suit named C.J., promised to look through their store security videotapes.
Later that day C.J. did indeed call. He said the tapes show my husband placed the wallet in his coat pocket at the cash register, and they didn’t see any pickpockets on their premises.
So we eventually found a police station near our flat. We were staying in the Clerkenwell area on Baker’s Row, which is where Charles Dickens set his famous novel “Oliver Twist”.
The police station has a self-service computer kiosk where you can input and report your crime information without talking to a live police officer.  John was starting to type in the information about the stolen wallet, when his cell phone rang. It was our Canadian home alarm security company from Toronto calling.  Did we lose a wallet in London?
The monitoring company said that he had a fellow on the other line from London, England who had found the wallet. We were dumbfounded!
The alarm company conferenced my husband with the caller, who gave us his name, address and telephone number, and suggested we come to his office to retrieve the wallet. He told us he was Kumar Shrivastava, the day watchman at the office building just opposite Fortnum & Mason.
That made sense to me since I thought that's likely where the wallet was lifted. But I admit I was still a bit nervous in case it was a scam, or the man was actually the pickpocket!
But when we arrived at the office building, Mr. Shrivastava was waiting for us with a big smile. He held out the wallet, and indeed it was my husband’s. Inside were all the credit cards, driver’s license, IDs, and everything was intact, except for about $100 in Canadian cash.
“I was never so happy to lose $100,” my husband said.
Mr. Shrivastava offered us something to drink, and a bathroom visit if we needed one, and told us that the postman had popped in and told him he had found someone’s wallet.
But instead of simply letting the Royal Mail process the wallet, as is usually done, and which might take months, Mr. Shrivastava opened the wallet to see if there was any contact information, found the only piece of ID that had a Canadian phone number on it, from our alarm provider, and, using his own personal long distance pre-paid telephone phone cards, he called.
Mr. Shrivastava wouldn't take any money from us as a reward, just our thank you, although he agreed to pose for pictures. We were stunned but thrilled at this amazing turn of events. We don't know what we would have done without his kind gesture. 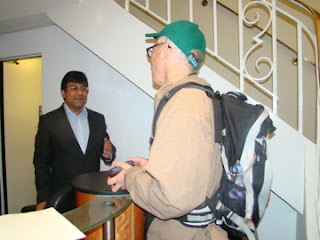 Later, when we returned to M&M’s to tell C.J. that we had retrieved the wallet, he told us that pickpockets in London are known for being courteous (his words) and usually don't throw the stolen wallets in the Thames or the garbage, but instead, drop them into a post box. So eventually, they can be returned to their owners.
Our vacation was saved and our bad experience turned into quite an adventure, and a great story, and we have to thank not only the “courteous” London pickpocket, but also M&M’s and mostly the Good Samaritan building concierge Mr. Shrivastava for his gesture.
When we returned from our trip, I tried to track down a personal email address to send Mr. Shrivastava a proper thank you.
I contacted some of the professionals who work in the same office building, to try to find him. One woman replied. She told me in an email she knows the concierge, who she says everyone calls Ravi.
“Having spoken to him on many occasions he believes that if you do a kind deed it comes back in other ways which is probably why he desired no recompense,” said Kim Mckenzie, office coordinator of Brian Champion Long, a property management company in the same building, Nuffield House, 41/46 Piccadilly, in London.
I also contacted the London newspaper the Evening Standard, suggesting they do a story about this kind fellow. They interviewed my husband by phone. Here is the item that ran, a week ago. 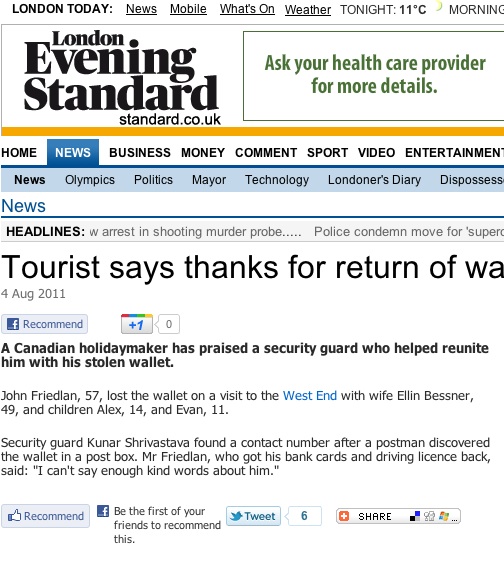 http://www.thisislondon.co.uk/standard/article-23975531-tourist-says-thanks-for-return-of-wallet.do
As for Mr. Shrivastava, he has not responded to any of our emails. I plan to send a hand written thank you letter and hope that he gets it.
So as the rioting and the fallout continue, I say that not all thieves in London are yobs, even the pickpockets are “courteous”, and there are people like Mr. Shrivastava who go out of their way to do what’s right, in an ocean of wrongs.
By the way, I saw on the news this week that the neighbourhood of Catford was one of the London suburbs hit by looting and rioting.
http://www.metro.co.uk/news/872039-catford-riots-six-pcs-charged-40-yobs-as-they-tried-to-loot-retail-park
We had originally booked to stay for a week at a self-catering flat in Catford, because it looked nice, and had a pool, but were advised by friends that it was a “bad” neighbourhood, sort of like Toronto’s Jane and Finch, and so we forfeited our week’s rent there and booked in Clerkenwell, which is where Charles Dickens set his novel “Oliver Twist”.
At the time when Dickens’ masterpiece was published, in 1838, the area was home to a gang of young pickpockets who came from a have-not upbringing. Clerkenwell now is a trendy zone, with Pret a Manger coffee shops, an automated Sushi restaurant, clothing designer showrooms, lots of pubs, a restaurant that serves customers in total darkness, and a Waitrose supermarket that sells gourmet take out for the local suit wearing singles. 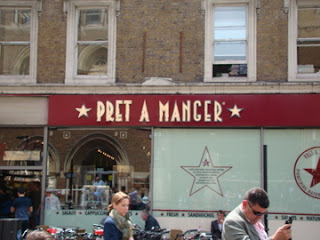 There have been no reports of looting in Clerkenwell.