Anderson Cooper's new day time talk show hit your televisions this week in North America. It's a departure from his usual disaster-coverage reporting seen on his other show "Anderson Cooper 360" every night on CNN.

This lifestyle show, available at 5 p.m. on CTV Toronto, is called "Anderson".  It will feature folks like Snooki from Jersey Shore, and other softer news interviews.

Our own Aakanksha Tangri, who is in her final semester of the joint journalism program with the University of Toronto, scored some coveted tickets to several of the tapings and even got to meet Cooper.

Here are her impressions of watching the star at work.

I watched a taping (actually three…) of Anderson Cooper’s new daytime talk show Anderson in New York City. After getting through security and filling out the waivers, we were seated in the studio. The set is classy and overlooks Columbus Circle. Cooper got a standing ovation when he walked in. After the first taping, we were told they had a “surprise” for us. It turned out to be Harry Potter star, Daniel Radcliffe! Radcliffe and Cooper worked together in the Broadway play “How to Succeed in Business Without Really Trying.” The conversation was lighthearted and he took questions from the audience.  There was another taping after and those who wanted to stay back could, and I of course did…
Throughout the three tapings, there was a lot of audience interaction and we could ask the guests questions (and to Cooper during commercial breaks). I observed the interviewing techniques he used and I knew those (and had even applied it) from what we learned in class. Leaning forward, pauses between questions, lingering eye contact and the different styles of questions. As a journalism student, I’m always curious to know what interviewing techniques good journalists use and I had a sense of reassurance seeing him apply what I’ve learned in j-school.
His producers and crew were very friendly and kept the atmosphere on the set light and humorous (some of them even danced!).
What struck me the most was how unpretentious and friendly Cooper is. He accepted when he made mistakes and discussed everything under the sun the audience wanted to. It was a memorable experience and I definitely learned a lot about interviewing by being part of the audience and watching the tapings. 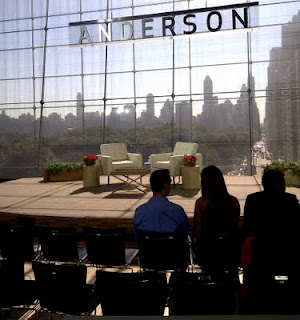 Do visible minority journalists in GTA newsrooms have to give up their cultural identity to be accepted by Canadian audiences/readers?
That's the question University of Toronto/ Centennial Journalism graduate Abbas Somji asked prominent journalists in the Greater Toronto area this summer in his new documentary film "Invisible vs Visible." The study of Toronto's newsrooms was part of his master's thesis for Ryerson and York's joint program. 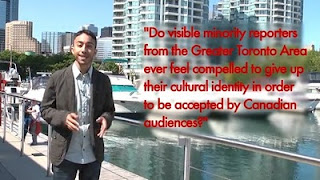 He interviewed Tony Wong of the Toronto Star, Harold Hosein of 680 News, Aparita Bhandari of CBC, among others. His findings and documentary are here on Vimeo:
Abbas Somji's documentary
Oh, and you can now call him Abbas Somji, MA.
We've invited Abbas to screen his film at Centennial Journalism later this school year.
Where our Grads Are:
Dan Bilicki blogs about sports for the Toronto Sun…from a young person's perspective.
Daniela Payne is now health editor at Canadianliving. Com
Jon Spratt is the Muskoka reporter for Metroland.
Adam Bemma is now producing a regular audio podcast for Journalists for Human Rights.
Journalism students search for story ideas everywhere. Pipe cleaners can even be a story, if you do a little research.