One of Toronto's award-winning community newspapers, the Toronto Observer brand, has been given a spiffy new look, and the first edition rolled off the presses Friday for distribution in the Scarborough area.

The newspaper, with its online companion TorontoObserver.ca, is produced by journalism students at Centennial College in Toronto. It has two readership catchment areas: East York, and Scarborough. This is due to our dual campus locations for the past half dozen years: East York's students at 951 Carlaw Avenue, near Danforth and Pape, and the UTSC/Centennial Joint Program students working from 755 Morningside, at Morningside and Ellesmere.

This fall, all the journalism programs are now located in Centennial Journalism's revamped newsroom in East York, where students from both the U of T/Centennial Joint Program and the East York fast-track and three-year programs work side by side with the Sports Journalism students.

The redesign, by Observer instructor Andrew Mair, who also works at the Toronto Sun, was unveiled earlier this week, after extensive consultations with outside experts and academics. Stories will be shorter, they will be focused on how they impact the readers, and layout and colour has been updated as well.


What do you think? Click here to see the old Observer and the new one, side by side.

As part of the overall renovations to Centennial Journalism, the broadcast studio has also been given a new look:  a new lighting grid installed by technicians from Videoscope, under the leadership of Ken Thasan. The anchor desk was donated by Earl Helland of Up Workshop, who's company has also built sets for Sportsnet, Maple Leafs TV, CTV and many more. It's still not done yet, but plans are to have everything ready for the live broadcast October 6, when students will cover the Ontario Provincial Election.

CAMPUS LIFE
Digital Imaging class gets clicking in the courtyard with Instructor Neil Ward.
RADIO NATION
Radio host Nicholas Pescod has been busy with his popular online music show "Radio Nation" which is broadcast from the lobby of Centennial Journalism's East York Campus. 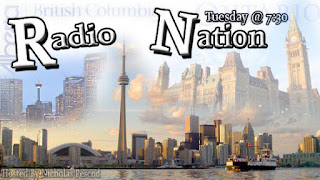 In June Radio Nation was mentioned in the Brantford Expositor:
read article here
(Page 25 middle column at the bottom.)
Pescod says,  "It's a small blurb but none the less it was pretty exciting."
In July he was interviewed on a Florida online radio show called, Friends Music Life (FML Radio) on www.W4CY.com

Listen for an interview with Sarah Lenore in late September. She was featured on America's Got Talent in 2008.