From a magazine to help Ontario's tech start up entrepreneurs, to the newest magazine covering high school sports in the Greater Toronto Area, the graduating students of the University of Toronto's joint journalism program with Centennial College have launched seven fabulous new niche magazines. 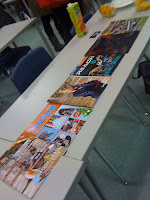 Before an industry panel made up of more then a dozen magazine publishers and editors, journalism professionals and industry experts, the students pulled out all the stops Wednesday to make their launches a splashy affair: judges were treated to samples of butter beer, ceviche salad, lava lamp making demonstrations, and Danish butter cookies, and more. Special guests included Sharon Mooney, from Centennial College's Centre for Entrepreneurship, Alex Levy, CEO of MyVoice, Entrepreneur of the Year, Dean Nate Horowitz, School of Communications, Media and Design, Maija Saari, Chair, School of Communications, Media and Design, Phil Alves and Eric McMillan, Toronto Observer.ca, Ted Fairhurst, Coordinator, Joint Journalism Program with University of Toronto, and the Cavanaugh family.

After a four hour competition that saw the students describe their new magazines and explain their business plans, and answer some tough question about advertising revenues and rival publications, the judges met "Canadian Idol"-style to try to decide the winner. (Answer? At the end of the article.)

"To put together a magazine from start to finish in just four months is absolutely amazing," said Paul Grossinger of Annex Business Media, one of the instructors of the senior level course at the journalism program. For the past three years Grossinger and his colleague Ellin Bessner, have co-taught this course that aims to introduce senior level students to the entrepreneurial side of the world of magazine publishing.

From conception to content, from design and layout, to marketing and advertising, the students worked tirelessly over the fall semester to create their own niche magazines, companion websites, multi media material, and social media communities. This year for the first time, some magazines created mobile versions that can be accessed on Ipads and using the new Windows8 platform.

"The aim of the course is for students to use all of the journalism skills which they have developed in their time at Centennial, and then become entrepreneurs to create their own jobs in the magazine industry, which some students in previous years have gone on to do successfully," Bessner said. "The course also prepares students to work for existing magazines, in the Rogers family or at other consumer or B2B magazine portfolios."

Blits: a magazine for book lovers. The editors say it is for book geeks, kind of like watching the extra features on DVDs. The premiere edition has features on best travel holidays such as the Harry Potter tour, Hobbit sites in New Zealand, and Shakespeare's birthplace. Also, how to buy book swag such as perfume made to honour Game of Thrones. And love it or hate it: Fifty Shades of Grey.

Strive Magazine: for parents of special needs children in the Greater Toronto Area. A magazine with features to help stressed out parents do the best for their children. Stories include how to get the most out of parent teacher interviews. Riding as therapy for autistic kids. Inspiring success stories in athletics.

nine twelve the magazine: the only magazine covering high school sports in the Greater Toronto Area. With 300 high schools to cover, the editors say it's time someone covered the top teams in basketball, football, swimming, golf and more. A profile of the best basketball player in the city. Birchmount High School: a sport powerhouse. And the volunteers who devote countless hours to varsity sports.

Teddy Girl Magazine: a fierce blast from the past honouring vintage lifestyle in Toronto, the vintage capital of Canada. The stylish editors are inspired by Marilyn Monroe, Mad Men, long lasting marriages, and perfume, and...high heels. Read about how to create vintage looks without spending a ton of dough. Why suits make the man. And see the photo shoot at St. Michael's College.

Reach Magazine: from science fiction to science journalism. The editors delve into the science behind Star Trek's teleportation, limitless pills to expand your mind, and more. And discover that Canadian scientists are already on the cutting edge of these achievements in medicine, technology and space that most people only know from the big screen.

Maria Maria: Toronto's newest English language magazine about local Latin culture in the T.dot. Music, dance, success stories. Aimed at newcomers to Toronto as well as second and third generation Canadians of Hispanic origin, and people like the editors, who just love all things Flamenco! Named after the famous Carlos Santana song.

ONset Magazine: For start up entrepreneurial students and young Ontario 20 somethings with ideas for new games, apps, software and business ventures. From how to get venture capital (not easy), to where to meet a co founder (online, and at the pub), to how to design a workspace that is funky and functional.

Thanks to all the judges. Congratulations to all the students and may your magazines continue in the future, with plenty of success.
Next stop:stay tuned for the results of the annual Independent Publishers Association of Ontario magazine competition. Coming in January 2013.