Canada’s top obituary writer, Sandra Martin of the Globe and Mail, was the first guest of the Centennial Journalism 2013 Speaker Series Wednesday Jan. 23 at the Centennial College library.

Martin, who’s new book “Working the Dead Beat: 50 lives that changed Canada” was published in October, 2012, gave students some inside anecdotes about Gordon Lightfoot not really being dead, except on Twitter, for one hour, and about who wrote Jack Layton's obituary.

Martin told students it’s daunting to be worrying all the time about which famous Canadian is going to die next.

Six senior journalism students presented their final magazine projects to the publishers of the Independent Publishers Association of Ontario Jan 16,  2013 at a meeting in Scarborough. Faculty members Ellin Bessner and Lindy Oughtred were also invited to the event. The students Nick Tragianis and Diana Faria won for “Drive” the best new student magazine in Lindy’s section of Beat Reporting, along with faculty Jim Wilson.

Both groups each had 30 minutes to present their projects to the publishers, answer questions, and gain valuable business advice as they continue to produce their great new niche magazines.

This is the fourth year the IPAO has sponsored the award, and has also provided mentorships and support for the Advanced Magazine Publishing course at Centennial Journalism. 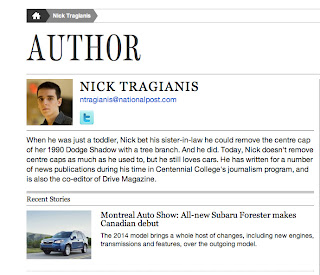 The members of the program advisory committee of the Journalism program have been rolling up their sleeves this month, giving direction to some curriculum changes now being considered. A hearty welcome to the newest members of the PAC, who are lending their expertise to guide Centennial Journalism into the future. The new members include:

Design guru Tim Harrower, author of “The Newspaper Designer’s Handbook”, and “Inside Reporting”, led a one-day workshop for Centennial College journalism students on Jan. 12, 2013. He talked about everything from designing for traditional print publications and the web to tablet and mobile devices. His mantra? It’s all about eyeballs – attracting them to our publications, that is! Photos courtesy of Paula Last/Toronto Observer.