The Amazing Race and The Star's Radio Room


Reports are out today that the Toronto Star is considering closing down its famous Radio Room as part of staff layoffs and belt tightening because of declining ad revenue. Here is the Toronto Star Union bulletin  about the cuts.
http://www.song.on.ca/files/Wrongmove.pdf

The news also came in Steve Ladurantaye’s story in the Globe and Mail.
http://www.theglobeandmail.com/globe-investor/toronto-star-to-cut-jobs-citing-declines-in-ad-revenue/article9263051/

This story has special reverberations for Centennial Journalism.

Many of our best and brightest students have launched their journalism careers thanks to the Star’s “infamous” radio room, where student interns monitor the police scanners and chase down stories on overnights and weekends and holidays, and then are rewarded with bylines on the online front pages, and print editions, as well.  Several of our students worked at the radio room during the school year, and juggled their “real” jobs while also trying to meet course requirements and assignments and attend meetings with their classmates. Some are still there now.

Clinching a job at the radio room has been seen as one of the best journalism internships in the country, and students from across the country (many with master’s degrees) compete fiercely for a slot.

We do hope the Star changes its mind about the radio room.

It’s Reading Week for journalism students and staff at Centennial Journalism in Toronto, but that doesn’t mean everyone is on a beach somewhere drinking pina coladas. Well, except for Ted Fairhurst, the coordinator of the Fast Track and University of Toronto Scarborough joint journalism program with Centennial. Hola Ted!

But the sports journalism students and faculty are also down in the sunny south, in Florida, although they are not lounging by the pool all day.

Program Coordinator Malcolm Kelly @sportsnag and Digital Imaging coordinator Neil Ward and the students arrived in Tampa on the weekend, after 25 hours on the bus, and are now busy covering sports in Florida, including MLB’s Spring Training, and also reporting on up and coming varsity athletes now living in the sunshine state.
Even when the athlete hails from across the pond in England! Here is student https://twitter.com/Kev_Cam   Kevin Campbell’s story about Marquette University golf recruit Adam Chester, posted in @TorontoObserver “The Toronto Observer”.

Advanced Interviewing students with instructor Lindy Oughtred got some up close and personal time recently with CBC interviewer George Stroumboulopoulos, during Centennial Journalism’s annual trip to watch his TV show at CBC headquarters in Toronto. @strombo.com


Fast Track journalism graduate Alexandra Innes recently won an Award of Excellence from the Poetry Institute of Canada for a story she entered in their 2012 National Short Story Contest. The Poetry Institute has now published a collection of short stories called Fireside Dreams, which you can buy online through the organization.
http://www.poetryinstituteofcanada.ca/bookstore.html 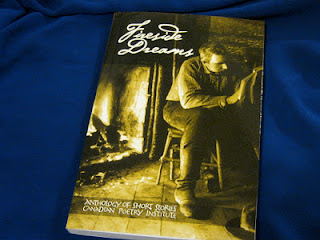 Student Tichaon Tapawamba is making a name for himself among the @CityLife film crowd in Toronto, and beyond, with a screening of his film recently at the Toronto International Film Festival Bell Lightbox.
Tichaon was one of three finalists selected to create a documentary, with the support of Academy Award winner Ben Affleck.
A story about Ticahon’s work was recently published by GoodNews Toronto, where another of our JJ/UTSC students Georgia Williams, is currently interning.

Here’s Tichaon’s Bio from the CityLife project itself.

Bailey Stead, a graduate from Centennial Journalism’s joint program with the UTSC, is applying to be a contestant on the new Canadian version of The Amazing Race.
http://www.ctv.ca/TheAmazingRaceCanada.aspx