By now, many of you may have heard about the washrooms in Sochi that didn't have shower curtains. Or the stray dogs wandering around the Olympics venues that may or may not have been euthanized by Russian veterinarians.

For my student, Alex Broad, 20, his creation of the @SochiProblems Twitter account started as a joke.
He was in the newsroom with me and my colleague, Toronto Observer editor Eric McMillan, who asked the students to mine some stories. They have daily web reporting shifts on the Toronto Observer news site, which is our award-winning Centennial Journalism newslab. It's their capstone course at Centennial Journalism, meaning they spend four days a week as reporters, editors, videographers, designers, copy editors, social media curators and columnists.

(The print edition, the East York Observer, covers the hyperlocal area around the Toronto neighbourhood of East York. The online edition covers the city and surrounding areas.)

Some days, just as happens in newsrooms everywhere, there's not much going on to write about, except for some police press releases, or, that day, the story about the poor cat that was stabbed 17 times.

For Broad, who is in his second year of journalism at Centennial, spilling a Tim's coffee on himself (#Canadian problems), ignited the idea to do a Twitter account called @SochiProblems.

Two days went by, and by Thursday, Broad was glued to his computer in class, watching incredulously as his Twitter account took off, and began to attract hundreds of thousands of followers. Big time news reporters wrote about it. USA Today. ABC News. Huffington Post.
It got more followers then the official Sochi Twitter account.


Apparently even the Russian official in charge of Sochi had to answer questions about all the problems the journalists were Tweeting via @SochiProblems. That's when he revealed there were apparently, according to Mashable, spy cameras in the showers.

We watched all this develop and I couldn't contain my excitement. By Thursday, I felt that we at Centennial had better take ownership of this story, and break it first on TorontoObserver.ca before some enterprising mainstream media reporter put two and two together, data-mined the Twitter back end (as our colleague William Wolfe-Wylie has been training our students to do) and revealed who Alex Broad was.

I don't know if I did the correct thing, but I knew Broad's idea was a great one, and I thought that his account and his initiative deserved good coverage, and I thought we at Centennial should be the ones to do the first story about him.

Broad's classmate, student Nolan N. White, also working for the Toronto Observer, called Broad on Thursday evening, did a telephone interview with him, and spent Friday morning putting the story together.

I copy edited the story, added some photos and had White add some links, and fact check everything, and we published it on Friday afternoon on the Toronto Observer website. 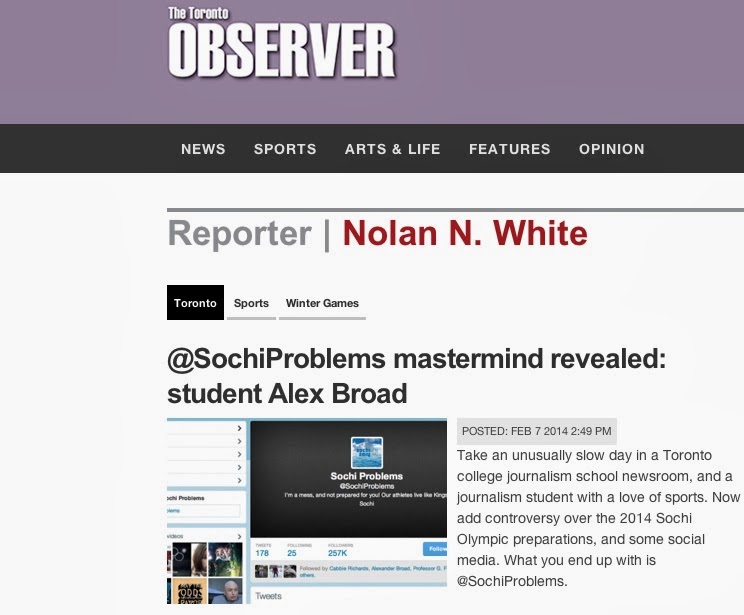 Since then, Broad has had a ton of interview requests.

CTV's Dan Matheson had Broad come down to the studios in Toronto Friday for an on camera interview.

And now my student's story is being told around the world. From Kenya to Australia. He has learned a lot since Tuesday when he launched @SochiProblems. He told one reporter that he is now crediting photos he uses, rather then just reposting them from other sources. And he also began to see his account as a journalistic way to use social media to uncover the underbelly of the $51 billion Russian Olympic preparations.

I wonder how he will concentrate on classes tomorrow? Congrats Alex!