Montreal Rabbi Michael Whitman paid tribute Saturday June 7, 2014 to the three RCMP officers killed in Moncton, as part of a wider memorial service at Adath Israel synagogue for all Canadians who risked their lives to serve others, including those killed on the 70th anniversary of D-Day in the Second World War.

As world leaders including Prime Minister Stephen Harper and U.S. President Barrack attended the official 70th anniversary events in France, synagogues from Manitoba to Montreal took part in the Kaddish for D-Day initiative. They paid tribute to the seventy Jewish soldiers and airmen from Canada who were killed in France and are buried in cemeteries across Normandy.

“By 1944, the Jewish soldiers understood they were not only fighting for Canada, but also for the remnant of the Jewish people in Europe,” Whitman said, explaining why he added their sacrifices, and the murders of the three Mounties, to the Adath’s regular prayer for the Canadian Armed Forces.
Some congregations, like in Winnipeg, did it as part of the Yizkor prayers recited on the holiday of Shavuot.

Calling the D-Day invasion a “mega-historical event”, on par with the founding of the State of Israel, the moonwalk, and the Holocaust, Rabbi Alan Green of Winnipeg’s Shaarey Zedek called on his worshippers Thursday June 5, to remember the sacrifices of local Jewish men who went overseas.

“Among the casualties on D-Day and in ensuing battles, were fourteen Jewish rifleman, troopers, captains, doctors, pilots, and lawyers--from Winnipeg,” Green told the congregation. “They're now buried in cemeteries in Northern France, and, as we're are about to perform the special Yizkor service for Shavuot--along with all those we're remembering today--on this day before the 70th anniversary of the D-Day invasion, I would ask you to add, the following fourteen names.”

He then read out the names, including Harry Segal, a rifleman with the Royal Winnipeg Rifles. The Rifles landed on Juno Beach at 7:49 a.m. on the morning of the invasion, and sustained heavy casualties, according to military records. Segal died June 8, 1944. He was married, and the son of Charles and Sarah Segal. In Toronto, several synagogues participated in Kaddish for D-Day, including Beit Rayim, in Vaughan, led by Rabbi Chezi Zionce, who read out all 70 names Thursday, also during Yizkor.

For Beit Rayim worshipper Nellie Miller, who knew one of the men on the list, Private Joe Gertel of Montreal, hearing the names “just sent a chill up my spine.”

“I recall those days,” Miller said in an interview, recalling growing up in Montreal when Gertel went off to enlist. He is buried in the Beny-sur-Mer Military Cemetery near Juno Beach, in France. He was killed in July 1944, while attached to the North Nova Scotia Highlanders. He was 22.

“I think it was exceptionally important and encouraged the Centre for Israel and Jewish Affairs to circulate the information, “ Frydman-Kohl wrote in an email. “The yahrzeit [anniversary] on the Jewish calendar will be 25 Sivan.”

And at the City Shul, Rabbi Elyse Goldstein read the names of five Canadian servicemen from Toronto and gave a little bit of information about each one, whether they went to the University of Toronto, or whose family were members of Holy Blossom Synagogue.

“It was beautiful. People were very moved,” she wrote, in an email.

According to Dorshei Emet member Lois Lieff, “it was indeed a very moving and emotional Kaddish.”

In Kitchener, where Beth Jacob Congregation lost three members of the shul during the Second World War, Kaddish was recited on the Friday evening June 6.

According to the synagogue bulletin, the three casualties were Sidney Acker, Lorie Reider and Samuel Harry Roseman. Reider and Roseman are buried in France.  Acker, of Guelph, was killed when his Anson bomber crashed during training in Ontario, in 1942. 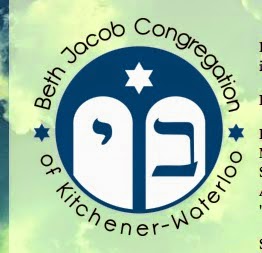