While a giant grey Hercules C-130 military aircraft carried out a solo fly past overhead, more than 200 French Jews gathered Sunday June 8, 2014 at the Normandy American Cemetery for what organizers called  “a very emotional service” – the very first communal Kaddish recited in memory of the fallen Canadian and American Jewish servicemen from the Second World War who are buried nearby.

The ceremony took place in the same spot where two days earlier, world leaders including U.S. President Barrack Obama and French President Francois Hollande paid tribute to the 70th anniversary of the historic military sacrifices of June 6, 1944, which led to the liberation of Europe.

“When the Jewish Choir of France began singing, led by Cantor Raphael Cohen with that tenor voice…it was just something unbelievable,” said organizer Jean-Max Skenadji, who became inspired to arrange Sunday’s landmark Kaddish while on a private trip to Normandy last winter.

“I discovered Stars of David at the [Colleville-sur-Mer] cemetery and I was just taken by such a big emotion and felt very sorry because, since I was alone, I wasn’t able to say Kaddish for them [the soldiers], ” Skenadji recalled Tuesday, in a telephone interview from his office in Paris.  After checking the religious legality of staging such an event, Skenadji, a long-time promoter in France, launched the D-Day trip.

“What would have become of us without the disembarkation of the Allies in France in June 1944?” he told the crowd.

One by one, the visitors read out the names of the 149 Jewish American soldiers whose tombstones are shaped like Stars of David at the cemetery, just inland from the famous Omaha Beach. The crowd also read out the names of nearly 60 Jewish Canadian airmen and soldiers. Their graves lie further east along the Normandy coastline, in cemeteries including Beny-sur-Mer, and Bretteville-sur-Laize.

The ceremony was “impressive, very solemn, and moving,” said Cantor Rabbi Raphael Cohen, a Paris-based clergyman, in an email after the ceremony.

During the 90-minute memorial, Cohen led the singing of the El Maale Rahamim prayer, plus Esa Einay, a funeral hymn, and the blessing for the State of Israel.

The crowd then recited the Kaddish aloud, led by Rabbi Moshe Lewin, the chief Jewish chaplain to France’s armed forces.


Among the other dignitaries on hand to pay respects were the mayor of Caen, Joel Bruneau, Isabelle Attard, a member of the French National Assembly from the Calvados region, Col. Yehudi Lahav, the military attaché at the Israeli embassy in Paris, and nine French war veterans who acted as flag bearers.

Local rabbis from the Deauville Chabad community inscribed the first few Hebrew letters in a fresh new Torah scroll they are dedicating to the memory of the Jewish servicemen and their wartime sacrifices. 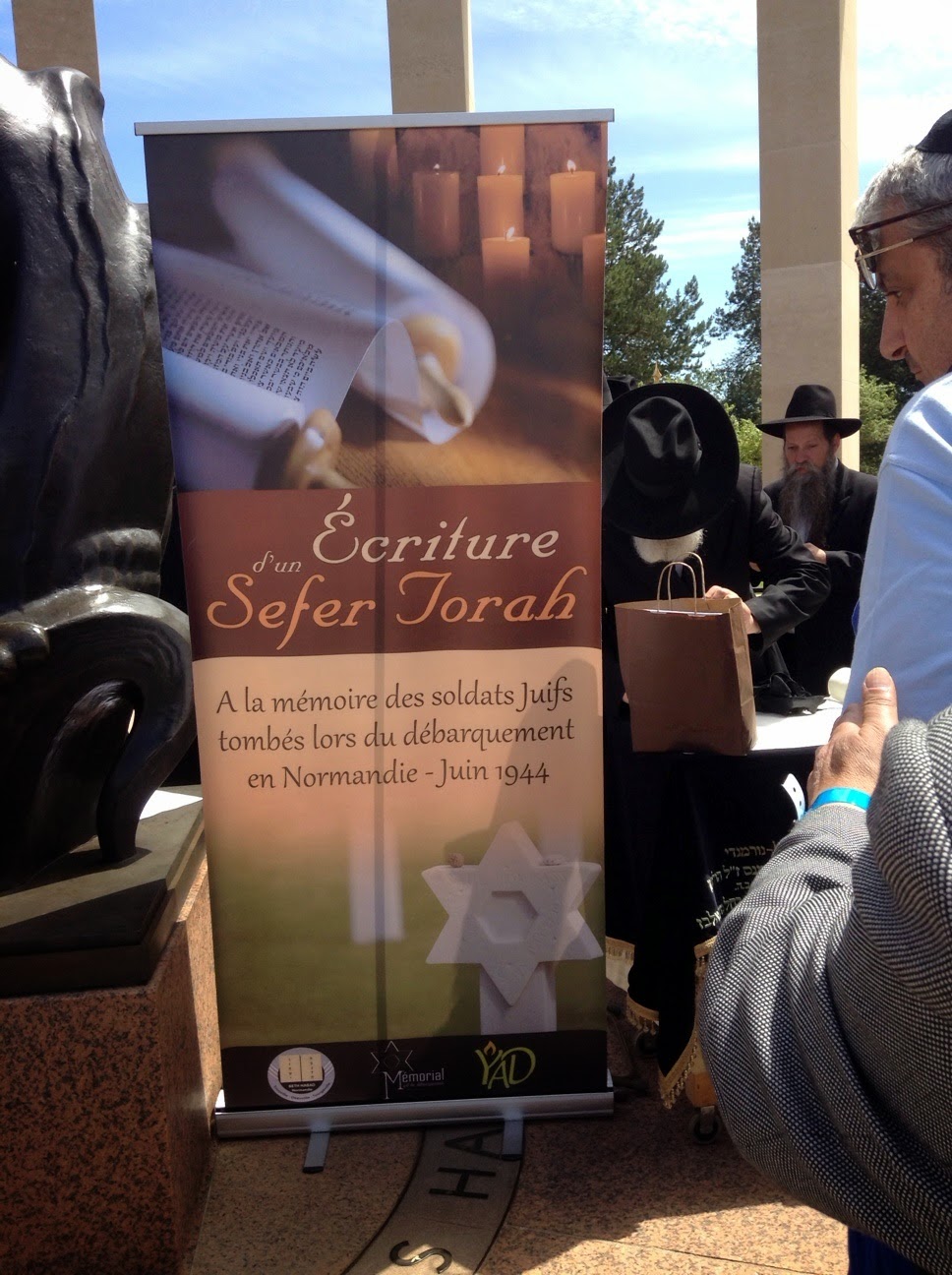 While organizers were pleased that so many people turned out for the event, including many non-Jewish visitors to the American cemetery who stopped to watch, Skenadji remains disappointed that neither the U.S. nor Canadian embassies in France sent representatives, despite repeated invitations.

“They just couldn’t come back to Normandy in order to be present at another ceremony,” said Skenajdi, acknowledging how diplomatic staff may have been too busy from the official state ceremonies on Friday.  “But from my point of view, that’s no excuse.”

A spokesperson for the Canadian Embassy in Paris, Colonel Guy Maillet, did send his regrets, saying there was just no time left for either himself or the Canadian ambassador, Lawrence Cannon, to fit this Sunday commemoration into the busy D-Day calendar.

And in Ottawa, the Department of Foreign Affairs issued a brief statement, saying Canada was represented in Normandy “at the highest level” during the D-Day ceremonies, and repeated Canada’s position on the State of Israel.

“Canada has a strong and close relationship with Israel based on shared values, common interests, and strong political and social ties between our two countries,” said Beatrice Fenelon, a spokesperson for the department.

For his part, Skenadji is hoping for a different answer next year, when he plans to stage the  Kaddish service again in Normandy.

And for next time, Skenadji is planning to invite the families of the American and Canadian soldiers killed here, to make the trip to France.

Next May, 2015 will see the world mark another milestone: the 70th anniversary of the end of the war in Europe, or VE-Day.