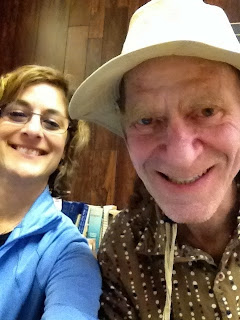 Leslie Lutsky is a Montreal radio show host, on Radio Centreville, and also works as a tour guide taking visitors around the historic places relevant to Montreal's Jewish heritage. He also spends time at the Canadian Jewish Congress Archives, located in the basement of a Concordia University building in Montreal.

That's where I met him, last summer, while I was researching for my new book about Canadian Jewish servicemen and women who were killed in uniform in the Second World War.

One day, the director of the archives, Janice Rosen, introduced us, and Leslie told me that his own father had been in the war, and had been wounded. I immediately looked up his father's name in the Congress casualty lists, and there he was, Moses Lutsky, on page 104. The short entry reads:


And there is a small photo of a non-wounded, smiling, 20-something Moe Lutsky, posing for the military's official photographers in a photo taken, I assume, well before he went overseas.

Last summer, Leslie told me a little about his father: Moe had lost both his feet during the war. But Leslie also told me that his father had not really talked about his war experiences.  Then Leslie invited me to do an interview for his weekly Saturday morning radio show, "Jewish Digest" on Radio Centreville, about my research.  We weren't able to schedule the interview then, and we lost touch.

A few weeks ago, I was reading Mark Zuehlke's book "Breakout from Juno", and nearly fell off my chair because on page 328, Zuehlke talks about the Grenadier Guards battles in France, and how they came under heavy German fire near Point 195 on August 10, 1944, during the Canadian Army's efforts to close the Falaise Gap and cut off the retreating Germans.  It was part of Operation Totalize, two months after the D-Day landings.

The author tells the story of what happened to Guardsman Moe Lutsky and the attack on his Sherman tank.

According to Zuehlke's research, a "shell tore into Sgt. John Henry Andrew's Sherman and he ordered the crew out. As Andrews turned to run, he heard Guardsman M. Lutsky crying from inside the tank. Climbing back in, Andrews say his gunner had both fleet blown off. Andrews lifted Lutsky out, lowering him to the ground. Kneeling beside the flaming wreckage, Andrews wrapped a tourniquet around each stump to stem the gushing blood. Then he carried Lutsky to an improvised aid post on the hill. Andrews stayed there the rest of the day giving medical aid to the wounded. He was awarded a Military Medal."

A quick Internet search uncovered a blog post or two by the late Moses Lutsky's niece about her heroic "Uncle Moe", with her recollections of Lutsky determined to learn to walk with his two prosthetic legs, and eventually becoming  the "tallest member of Dad's family".
http://promptprose.blogspot.ca/2013/05/remembering-uncle-moshe.html

I was excited and at the same time, hesitant, and wasn't sure whether I should contact Leslie after all this time, and tell him what I'd discovered: that his father had been wounded August 10, not Sept. 14, and that a heroic Canadian tank sergeant had saved his father's life and been awarded a medal for his actions. I worried that I would upset Leslie, or that perhaps it wasn't my place to stir up old wounds after so many years.

But after a few days, I did contact Leslie and asked him if he wanted to know. He said he did. And so I sent him the links.

He told me it was very emotional for both him and his sister to read about this, but that they were also excited to try to find their long-lost cousin who had blogged about their father, and that they would also try to track down the soldier who had rescued their father to see if he was still alive.

While the Lutsky children absorbed the precious details of their father's ordeal and subsequent rescue, Leslie and I agreed to meet in Montreal for that long, postponed radio interview. We met at - where else? - the archives of the Canadian Jewish Congress, and spent a lovely half hour recording our chat.

While I didn't spill the beans on-air about Lutsky's own personal journey, what happened with his father's story is something that I am experiencing a lot as I contact and interview the surviving siblings and children and next of kin of the 430+ Canadian Jewish servicemen and women who I am writing about for my book. Often, I know more about their late uncle or aunt and what happened to them, than the families do. For one thing, there was no Facebook, or LinkedIn in the 1940s, and without the luxury of the Internet, there was no way for them to get the War Diaries, or personnel service files of their loved ones.

Now, 70 years later, I do hope that my work not only sheds a light on an important but untold story of the contribution of Canada's Jewish community to the country's war efforts, but also brings some comfort or closure to the 400+ families whose loved ones went off to war and didn't come home.

If you know a Canadian Jewish serviceman who was killed during the Second World War, either at home, or overseas, please get in touch with me via my email at ebessner@gmail.com.

You can hear the podcast of our interview here, courtesy of Radio Centreville.

You can reach Leslie Lutsky for a tour, through his Facebook Page, or Radio Centreville.