Well, that isn't the whole story.

This photo has taken on a life of its own since I first saw a copy of it online last year, while researching for my book about the Canadian Jewish servicemen and women who were killed during the Second World War.

Here is what I know about that photo, and some of the people in it.

1.   It was taken in Reykjavik on Saturday, October 12, 1940, on Yom Kippur, not on Rosh Hashanah, by a very famous Icelandic photographer named Sigurður Guðmundsson. I know he took that photo thanks to an Icelandic researcher and historian Vilhjálmur Örn Vilhjálmsson, who has been searching for the men in the photo since 1994, and contacted me earlier this year. You can read his blog post here.

2. I know there were at least two Toronto Jewish servicemen in the photo, and both became casualties of the infamous military raid on Dieppe on August 19, 1942: On the extreme left, in the middle row, is Pvt. Lionel Cohen, who I wrote about in my last post. He enlisted as soon as the war broke out in 1939, and was with the Royal Regiment as a commando. He left behind a widow, Rose.

On the other side of the photo on the right, in the middle row, the second from the right, is L/Cpl. Meyer Bubis, also of Toronto, also with the Royal Regiment. He, too, enlisted just when the war broke out in September 1939, and after training in Canada, was shipped over to Iceland on "The Empress of Australia" in mid-June, 1940.

3. Meyer Bubis sent a print of that Yom Kippur photo back home to his father in Toronto, with a note on the back saying it was the first such service ever held in Iceland. This photo is now at the Ontario Jewish Archives, donated by Bubis's surviving sisters, and you can see it online here.

Here is a screen cap of his note, courtesy Ontario Jewish Archives: 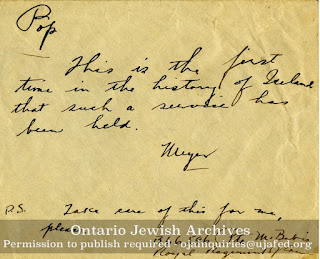 4. The story of this Yom Kippur service is a fascinating Icelandic "Saga", as Vilhjalmsson  calls it. Here is what he says:

After the British occupied Iceland, Allied Jewish servicemen began to look for "landsmen" or other Jews, to hold services and observe religious holidays. There were also a handful of Jewish refugees from the war living in Reykjavik at the time, and so efforts were made through the British Protestant Chaplain to find a place to hold Yom Kippur services that year. At first, the military offered them a chapel in an old city cemetery. There was even an invitation drawn up, and sent out to the Jews in the Royal Regiment. Lionel Cohen got one and sent it home to a friend in Canada. Here is what it looks like.

According to Vilhjamsson in a piece for the Jewish Political Studies Review, in 2004, the organizer, author Hendrik Ottosson, thought that having the service in a cemetery was insulting, so he managed to find a better spot at the Good Templars' Lodge. Despite having no rabbi, Ottosson and his wife, who was a Jewish refugee, located a Torah and two prayer shawls, and spiffed the place up a little to look like a proper chapel. And they held services on Yom Kippur Eve and twice the next day. The photo session happened just before the 25 worshippers broke their fast.

Vilhjamsson says it was the first Jewish service ever held in Iceland, and the first non-Christian one on the island since the year 1000 A.D.

5. Both Bubis and Cohen left Iceland with their regiment for England not long after the High Holidays, in late October 1940. Two years later, both would be dead, participating in the Dieppe raids.  The Royal Regiment landed a little east of Dieppe, at Puys, while dawn was breaking, and the Germans saw them, and mowed them down. The Regiment lost over 500 men that day, half killed, half taken prisoner. While Cohen is buried in the Canadian War Cemetery in Dieppe,  Bubis was declared missing, until Canada declared him officially dead in November, 1942. He is buried at Dunkirk, France.