They both grew up in pre-war Toronto, although one came from the poor neighbourhood known as The Ward, while the other came from a nicer neighbourhood near the Beaches. Both served in the Second World War, and it isn't hard to see why they'd never met: Lt.- Col. Norman Cohen (left) served as a navigator in the RCAF and was posted to England and then to Burma, while Lorne Winer was with the Royal Canadian Artillery and served in England and then through Normandy and Northwestern Europe after D-Day until long after V-E Day.
Cohen and Winer met Tuesday May 16, 2017 in the gymnasium of Crestwood Preparatory School in Toronto, at an appreciation breakfast put on by the amazing history teacher, Scott Masters, and his students. I was honoured to be invited, too. For ten years now, Masters and his classes have done oral history interviews with veterans, and Holocaust survivors, and now are focusing on survivors of Canada's '60s scoop of First Nations children.
Cohen is his '90s, and just retired after a career in the insurance business. Winer, who is just a few years older (99!) keeps busy, too, volunteering with the Royal Canadian Legion and, like Cohen, both granted interviews to the Crestwood students.
They are among the 17, 000 Canadian Jewish men and women who put on a uniform during the Second World War, and whose important stories are now being told. Both veterans are featured prominently in my forthcoming book "Double Threat: Canada's Jews, the Military and WWll" which is being published by New Jewish Press.
Look for it on November 11, 2017 through Amazon.ca, Chapters/Indigo and Target. Preorders are available now. 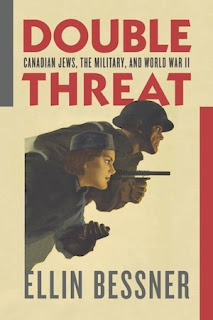